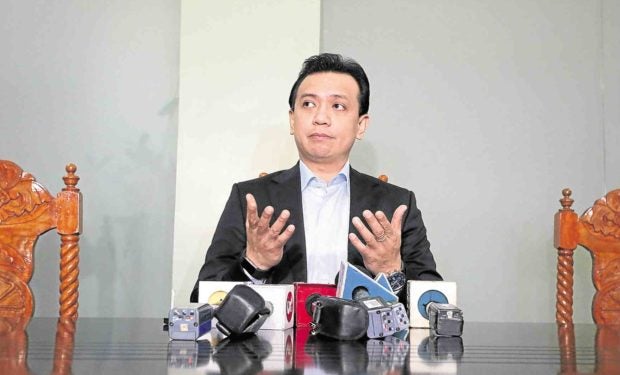 The Pasay City Prosecutor’s Office found probable cause to charge Sen. Antonio Trillanes IV with inciting to sedition, based on a complaint filed last year by a group of lawyers affiliated with Volunteers Against Crime and Corruption (VACC), one of President Duterte’s staunch supporters.

A resolution signed by Senior Assistant City Prosecutor Joahna Gabatino-Lim and issued on Thursday said Trillanes intended “to sow the seeds of sedition on the mind of the people” and spread “a feeling of disgust and hatred toward the President.”

The complaint stemmed from a privilege speech Trillanes delivered on Oct. 3 last year, which accused President Duterte of amassing P2 billion in unexplained wealth and suggested that soldiers use M-60 machine guns to shoot him because of it.

“Mr. Duterte said just earlier today that if one could find P40 million in his bank accounts, he can be shot and killed,” Trillanes said in the speech. “If the soldiers could see this (P2 billion), they will use an M-60 machine gun on you. These are many. The magazine will be emptied if you’re looking for P40 million.”

The resolution contended that “although the speech was delivered while the Senate is in session … we believe that the same was not made in accordance with legislative function.”

It further noted that shortly after the speech was delivered, a signature campaign was launched to pressure Mr. Duterte to open his financial records. This, the resolution said, was proof that Trillanes’ remarks produced “disaffection among the people and a state of feeling incompatible with a disposition to remain loyal to the government.”

But while the resolution found probable cause to charge Trillanes with violation of Article 142 of the Revised Penal Code, it dismissed another complaint that accused the senator of instigating a coup d’etat.

Trillanes’ remarks did not directly propose “a swift attack accompanied by violence, intimidation, threat, strategy or stealth against the government,” it said.

In an interview, VACC lawyer Emmanuel Luna, who represented the six lawyers who filed the complaint, said Trillanes’ speech and subsequent actions were meant to destabilize the government.

“It’s a political offense but that doesn’t mean [the complaint we filed] is political harassment because we have evidence that he violated the law,” Luna said. “That makes a world of difference if you have evidence, as opposed to mere blah blah blah or sheer allegations.”

The case had been raffled off to Branch 45 of the Pasay Metropolitan Trial Court, the lawyer said.

In a statement, Trillanes said he was ready to go to court.

“Unlike Duterte who is coward about facing his case, I will face it,” Trillanes said, referring to the complaint filed against Mr. Duterte in the International Criminal Court and the President’s March 14 announcement that the country was withdrawing as a signatory to the Rome Statute, which created the ICC.

He dismissed the Pasay complaint as a form of harassment, arguing that it was based on a Senate privilege speech that accorded him immunity from suit.

He maintained that the speech did not incite anyone to do anything.

“If the goal is to scare me from raising questions against Duterte, as I’ve said before this will only prod me to stand against the wrong and the bad,” Trillanes stressed. —WITH A REPORT FROM CHRISTINE O. AVENDAÑO