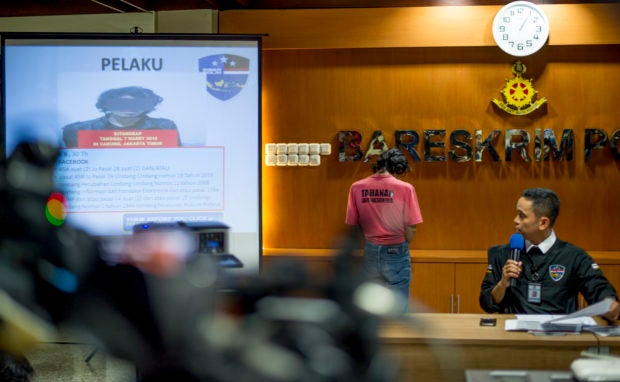 This photograph taken on March 8, 2018 shows Indonesian cyber crime police displaying a suspect accused of spreading fake news and online hate speech, in Jakarta.
Indonesia is battling a wave of fake news and online hate speech ahead of presidential elections in 2019, as a string of arrests underscore fears it could crack open social and religious fault lines in the world’s largest Muslim-majority country. AFP

Indonesia is battling a wave of fake news and online hate speech ahead of presidential elections in 2019, as a string of arrests underscore fears it could crack open social and religious fault lines in the world’s largest Muslim-majority country.

The pluralist nation’s reputation as a bastion of tolerance has been tested in recent months, as conservative groups exploit social media to spread lies and target minorities.

Police have cracked down, rounding up members of the Muslim Cyber Army (MCA), a cluster of loosely connected groups accused of using Facebook, Instagram and Twitter to attack the government and stoke religious extremism.

Two of the group’s most high-profile falsehoods were claims that dozens of Islamic clerics had been assaulted by leftists and that Indonesia’s outlawed communist party was on the rise, according to police.

Communism — and its hallmark atheist beliefs — remains a taboo subject in Indonesia, where bloody purges under the Suharto dictatorship in the mid-1960s killed half a million suspected leftists.

Although the Southeast Asian nation has seen Internet hoaxes before — including smear campaigns against President Joko Widodo during the 2014 presidential elections — the recent clampdown reflects authorities’ mounting unease about their possible impact on election campaigning.

Indonesia will hold simultaneous regional elections in June, ahead of a presidential ballot in 2019.

Last month, the communications ministry announced it was deploying new software to identify fake news websites, while Widodo — who has battled false Internet claims that he is a communist — inaugurated a new cyber security agency in January.

Indonesia’s problem with internet hoaxes and misinformation campaigns reached fever pitch in the lead up to elections in Jakarta in late 2016 and early 2017, with incumbent governor Basuki Tjahaja Purnama, nicknamed Ahok, bearing the brunt of it.

Ahok  — the city’s first Christian and ethnically Chinese leader —  was lambasted by Islamic hardliners after an edited video appeared to show him insulting the Koran.

The allegations drew hundreds of thousands of conservative Muslims onto the streets of Jakarta in major protests, and led to the once-popular Ahok – an ally of Widodo — being jailed for blasphemy after losing the election to a Muslim challenger.

“There was a clear sentiment about religion in many of its accounts.”

The group has at least four ideologically driven clusters that spread inflammatory material with the help of bots — software programmes that run repetitive tasks — or by hacking into opponents’ online accounts, said Damar Juniarto, Indonesiacoordinator for digital rights group SAFENET.

One cluster pushed radical Islam and the establishment of a caliphate, while others supported conservative political and military figures opposed to Widodo.

“They pose a threat to the national election in 2019,” Juniarto said.

“What they want to do now, in 2018, is copy what happened in Jakarta in other parts of the country.”

Police have pledged to be on high alert for hoaxes, but they have their work cut out.

Some 130 million Indonesians — about half the population — spend an average of nearly three-and-a-half hours a day on social media, one of the highest rates in the world, according to data from London-based creative agency We Are Social and social media management platform Hootsuite.

“Many Indonesian people maybe think that every article and video on the internet is right,” Ali said.

“They don’t know it is false.”

Indonesia has long been praised for its moderate, inclusive brand of Islam, and it officially guarantees freedom of worship for six religions.

But minorities — including Non-Muslims and LGBT people — have been increasingly targeted in recent years and fake news is adding fuel to the fire, SAFENET’s Juniarto said.

“This can easily become real segregation and conflict if nobody does anything about it,” he added.