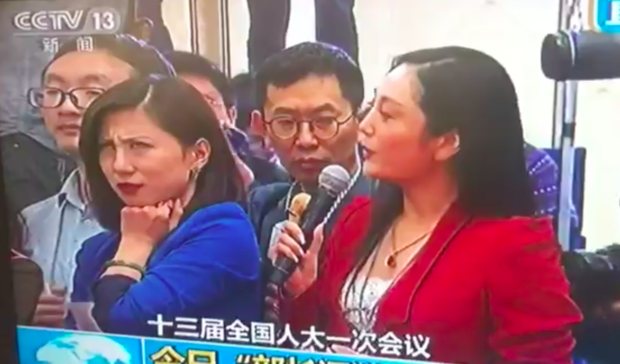 One Chinese reporter was caught rolling her eyes yesterday during the morning session in the second week of China’s National People’s Congress (NPC). She had to face some consequences.

Reporter Liang Xiangyi from the financial news site Yicai seemed like she wasn’t able to contain herself, as she was caught live on national television rolling her eyes at Zhang Huijun, a reporter from American Multimedia Television USA. According to a report by the South China Morning Post yesterday, the eye-rolling by Liang happened after Zhang started lobbing a softball question to state assets chief Xiao Yaqing.

The video of Liang’s eye-roll has since been shared and gone viral the world over. In the video, Liang, in blue, can be seen looking at Zhang, in red, as she started to speak. Zhang’s 40-second question, however, seemed to have irked Liang, as Zhang dabbled on about the 40th anniversary of China’s opening up and reform. Liang can be seen resting her chin on her hand, looking at Zhang and eyeing her up and down, before dramatically rolling her eyes.

The eye-rolling incident happened in the “Ministers’ Corridor”, a fenced off area where reporters are allowed to ask questions to government officials and ministers after the end of the NPC sessions. However, most of the questions are screened beforehand and Zhang was one of those chosen to ask her question.

Last night, just hours after Liang rolled her eyes on national television, it was discovered that her page in the Chinese microblogging site Weibo had been taken down. Search results of her name on the said platform were also censored. According to the South China Morning Post, authorities have also revoked her media accreditation to cover the NPC, as relayed by her colleagues.

The National People’s Congress, which started in March 5, saw the elimination of term limits for China’s president Xi Jinping, giving him the power to rule indefinitely. This ruling comes after several words on Weibo, such as “Animal Farm”, “I oppose” and “disagree”, among others, were censored by Chinese authorities last month.

The infamous eye-roll video may be watched below. Cody Cepeda/JB

Journalist is China’s ‘most dangerous woman’