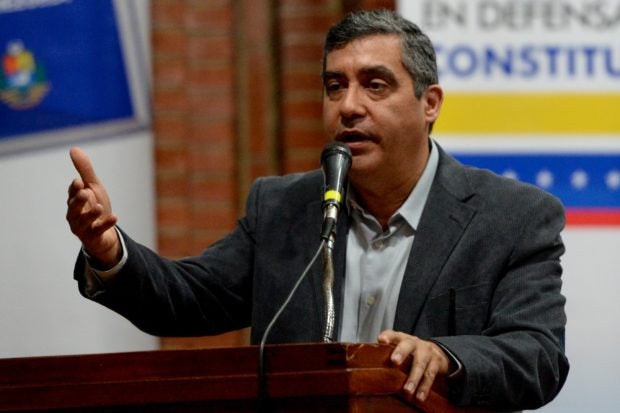 Former Venezuelan Interior and Justice Minister Miguel Rodriguez Torres, speaks during the “In Defence of Democracy Forum” held by the opposition in Caracas on August 6, 2017 a day after a new assembly with supreme powers and loyal to President Nicolas Maduro started functioning in the country. (AFP FILE PHOTO / Federico PARRA)

“He was wanted… for involvement in actions against peace. He participated in conspiracies and plots in the pursuit of the evil intention of attacking the monolithic unity of our armed forces,” a statement said.

His arrest comes ahead of a controversial May 20 presidential election, which the crisis-hit country’s main opposition is boycotting.

Violent protests in which dozens died erupted in 2017 against President Nicolas Maduro’s rule as Venezuelans struggle with chronic shortages of food and medicine.

At the height of that unrest, rogue pilot Oscar Perez used a stolen helicopter to bomb Venezuela’s Supreme Court, prompting Maduro to accuse him of a coup. The government announced in January that Perez and seven other “terrorists” had been killed.

Maduro has accused Rodriguez Torres — who participated in a failed 1992 coup attempt led by Chavez — of being linked to right-wing plans to overthrow him.

Iris Varela, the minister responsible for prison affairs, had called for Rodriguez Torres’ arrest for alleged involvement in Perez’s plans.

According to the government, Rodriguez Torres, who was also the intelligence chief of former president Hugo Chavez, planned “criminal actions” against the government.