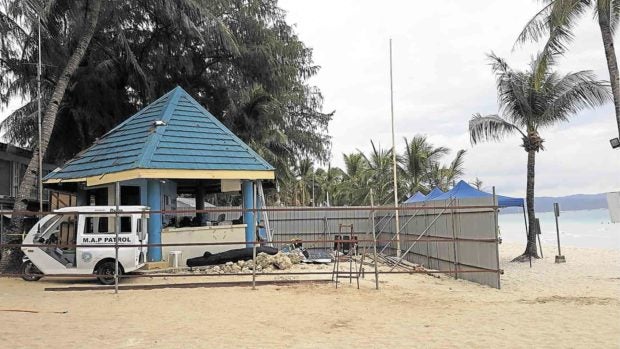 A P4.98-million multipurpose government building is rising on this site along the beach at Barangay Balabag on Boracay Island. The project, however, was stopped by the DENR for violating the 30-meter shoreline easement rule. —NESTOR P. BURGOS JR.

ILOILO CITY — In Boracay, even the local government has been found violating environmental laws.

The P4.98-million project, funded by the Malay town government, is being built along the beach at Barangay Balabag. The building’s ground floor has public toilets and washrooms while the second floor will house a command center for lifeguards and a detachment of the Municipal Disaster Risk Reduction and Management Office.

Jim Sampulna, DENR regional director, said the agency had to stop the project because it was within the easement of 30 meters from the waterline, where permanent structures were not allowed to be built.

The project, being undertaken by contractor Audric Construction & Supply based at Banga town in Aklan, is set for completion on May 27.

Sampulna said the CDO was consistent with the DENR’s drive to issue notices of violation and show cause orders to violators of environmental laws in Boracay.

In an earlier interview, Rowen Aguirre, Malay executive assistant for Boracay affairs, said a municipal ordinance allowed any government structure to be put up along the beach if its function was essential.

“It’s an essential structure and we have no other space to construct it,” Aguirre said, noting that the building would be connected to the island’s sewerage system.

But Sampulna said only the DENR could allow exemptions to environmental laws and assess if such structures were necessary.

Violations of environmental laws and the unregulated development on the island have been blamed for the deterioration of the local ecosystem.

The Department of the Interior and Local Government has also started investigating local officials to determine any liabilities for environmental problems on the island.

The DENR said it would “force” the local government to strictly enforce an ordinance requiring residents and business establishments to connect to the island’s sewerage system.

“The local government of Malay has enacted [Municipal] Ordinance No. 307 in 2012, which mandates businesses and residents to connect to the sewerage system of Boracay. The law is there. What we want to see is for it to be strictly enforced,” Environment Secretary Roy Cimatu said in a statement.

The ordinance mandates structures within 61 m from the nearest link to the sewerage system to be connected to the network. Those beyond are required to put up sewerage treatment plants and septic tanks.

“Boracay’s sewage is the number one problem on the island, and it requires urgent action from us. We are giving companies not connected to the sewer lines one month to link up. If they fail to do so, they will face sanctions,” Cimatu said.