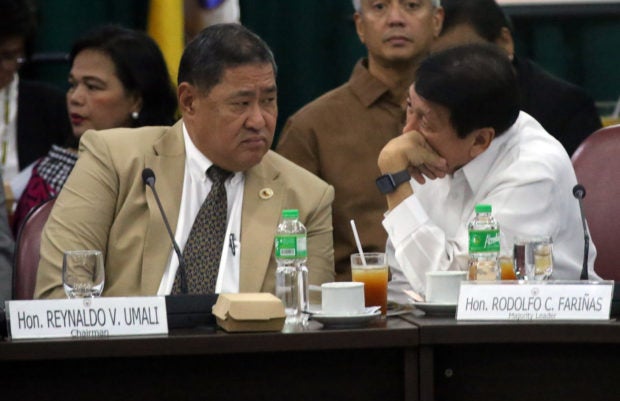 The submission of the draft articles of impeachment against Chief Maria Lourdes Sereno at the committee level has been moved to next week, House of Representatives justice committee chair Rep. Reynaldo Umali said Tuesday.

But Umali said they failed to finish finalizing them due to disagreements on which allegations to include in the articles of impeachment.

Umali said they would be ready to present the documents by Monday or Tuesday, at the latest.

The committee chair said they were sure to include allegations against Sereno related to her alleged non-filing of statements of assets, liabilities and net worth (SALN), and her lavish lifestyle.

“Probably remove some that may not be that strong. But when you look at it in its entirety dun lumalabas yung persona nya.  Lumaabas yung psych disorder,” Umali said.

Lawyer-complainant Lorenzo Gadon made 27 allegations to support his claim that the Chief Justice committed culpable violation of the Constitution, betrayal of public trust, corruption and other high crimes.

Umali said they had yet to finalize the roster of public and private prosecutors.

Earlier, he bared that former Senate President Juan Ponce Enrile expressed willingness to be part of the private prosecution team.

READ: Enrile may be part of prosecution at Sereno impeachment—Umali

Former lawyers of late Chief Justice Renato Corona during his impeachment trial in 2012 also volunteered to assist the prosecution, according to Umali.