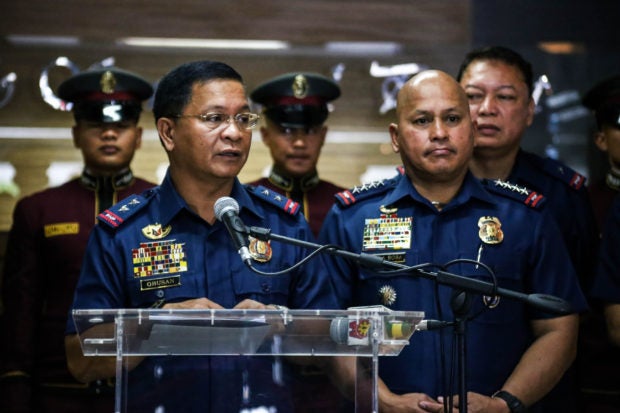 Human rights groups on Monday condemned the restoration of the subpoena power of the Philippine National Police amid the Duterte administration’s brutal war on drugs.

“At a time when the PNP has been committing widespread rights violations without accountability in the war on drugs, granting the police further powers to act without judicial authorization is a recipe for disaster,” Carlos Conde, a researcher for New York-based Human Rights Watch, said in a statement.

The local group Karapatan said it considered the new law part of the Duterte administration’s growing “arsenal of repressive legislation.”

“We have seen rights violations knowingly committed by the police, emboldened by the protection granted to them by this government. Now we have another law that will give them more power to abuse,” Karapatan secretary general Cristina Palabay said in a statement.

More than 4,000 mostly poor and small-time drug users and pushers have been killed by police since the launch of the campaign in June 2016.

Thousands more have been killed in vigilante-style attacks.

The government “should be finding ways to restrain a police force that has been out of control, not giving them a green light for further abuses,” Conde said.

With a national ID system being worked out in Congress and now the PNP subpoena power, the Duterte administration is legislating an “arsenal of repressive laws,” Palabay warned.

To be used sparingly

Malacañang, however, said that the PNP would use its subpoena power sparingly.

Speaking to reporters, presidential spokesperson Harry Roque noted that the law limited the subpoena powers only to three police officials.

Any request for a subpoena would have to go up the chain of command, Roque said.

“I suppose, because of the fact that there are limited signatories to the subpoenas, that it will be reserved for the extreme circumstance where individuals have absolutely refused to cooperate in an ongoing investigation,” Roque said.

PNP Director General Ronald dela Rosa said on Monnday that he would not use his subpoena power, unless the CIDG director and deputy director were both unavailable.

The law restored the power that was granted to the Philippine Constabulary-Integrated National Police (PC-INP), the forerunner of the PNP.

Dela Rosa sought to ease the rights groups’ fears by raising his right hand, as if taking an oath, at the press conference.

He directed the CIDG director, Chief Supt. Roel Obusan, to do the same.

Then he intoned: “I swear before God, the people and [the] media that I will never, never abuse this power.”

For good measure, Dela Rosa sang a line from the 1990s song “I Swear.”

The police officials gave the assurance that the new law was neither against the poor nor a tool for the war on drugs.

Dela Rosa said the subpoena power could be used in investigations of high value targets, which was the other approach to fighting illegal drugs.

Obusan said the CIDG handled mostly high-profile and sensational cases, which often involved the “wealthy and the well-learned.”

He said he hoped the subpoena power would help the CIDG in reopening cold cases.

Dela Rosa said the PNP had numerous cases that had gone cold because of the lack of cooperation from witnesses and other agencies.

“With this power, these cold cases can be revived because we can issues subpoenas and, hopefully, bring clarity to these cases,” he added. —WITH REPORTS FROM LEILA B. SALAVERRIA AND JAYMEE T. GAMIL