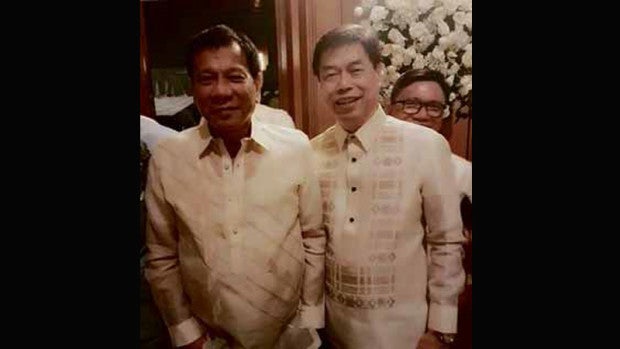 WEDDING COSPONSORS President Duterte and Peter Lim were cosponsors at a 2016 wedding in Cebu City.

Cebu businessman Peter Lim has evaded facing criminal charges for his involvement in the illegal drug trade — an allegation made by no less than his “kumpadre” (wedding cosponsor), President Rodrigo Duterte.

Lim, a suspected drug triad boss, and several other high-profile drug suspects have been exonerated by the Department of Justice (DOJ) in a drug trafficking case filed by the Criminal Investigation and Detection Group (CIDG) last year, the Inquirer learned on Monday.

The resolution, approved by acting Prosecutor General Jorge Catalan Jr., was issued by a panel of DOJ prosecutors on Dec. 20, 2017, but was apparently kept from the media.

Shortly after launching his brutal drug war in 2016, Mr. Duterte named Lim as one of the country’s biggest drug lords. The President also threatened to kill him on sight.

He, however, eventually went soft on Lim, who reportedly used the alias Jaguar.

The President even granted Lim’s request for a meeting at Malacañang’s satellite office in Davao City, an opportunity not accorded to thousands of drug suspects killed in the government’s war on drugs.

In throwing out the complaint, the DOJ panel of prosecutors said the weak evidence presented by the CIDG and the “inconsistencies” in the testimony of its lone witness, Marcelo Adorco, prompted them to absolve Lim and his fellow respondents.

Besides Lim, cleared of violation of Section 26(b) of Republic Act No. 9165, or the Comprehensive Dangerous Drugs Act of 2002, were confessed drug kingpin Kerwin Espinosa, convicted drug lord Peter Co, Lovely Impal, Max Miro, Ruel Malindangan, Jun Pepito and several others known only by their aliases.

In Cebu City, one of Lim’s lawyers, Pedro Leslie Salva, was happy with the DOJ decision. “At least, his name was cleared and truth came out,” he said.

Salva said Lim’s family was badly affected by the accusations hurled against the businessman.

“We’re grateful to President Duterte for giving him (Lim) the chance to explain and tell the truth. We strongly support the government’s campaign against illegal drugs because these prohibited substances are really not good for the country,” he said.

Asked if Lim’s camp had foreseen the outcome of the DOJ case, Salva said, “Yes, I did.”

“Because, for the many years I’ve been representing him (Lim) as one of his lawyers, I never observed him engaged in any illegal activity, including drugs,” he added.

He said one transaction involved the delivery of 50 kilos of “shabu” (crystal meth), which Lim personally handed over to Espinosa on the parking lot of Cash & Carry supermarket in Makati City on June 7, 2015.

The DOJ prosecutors, however, said the witness’ allegations were “unworthy of consideration” and that his testimony was “rife with inconsistencies and contradictions.”

Moreover, Humarang and Reyes said Adorco’s claims were contrary to the “standards of human experience and the logical course of reality.”

“Indeed, for an evidence to be believed, it must proceed not only from the mouth of a credible witness, but must be credible in itself as to hurdle the test of conformity with the knowledgeable and common experience of mankind,” the DOJ prosecutors ruled.

“We are mindful of the zealous intention of the complainant to eliminate the illegal drug menace prevalent in our country today, and it is public knowledge that this fight has taken numerous lives,” the prosecutors said.

“However, … ‘judges, prosecutors and law enforcers are reminded that in the performance of their duties, they should act with circumspection,’” they added.