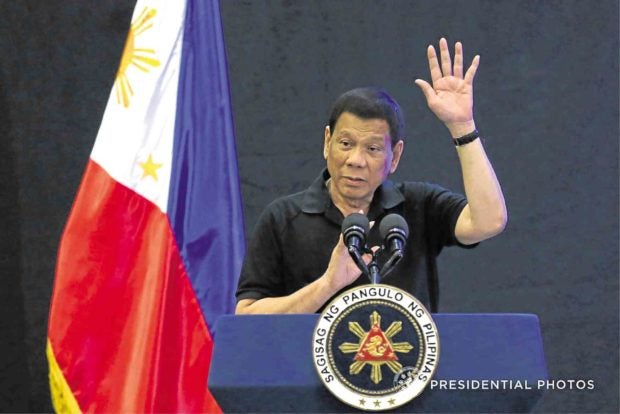 He did not come home because I will really kill him . . .President Duterte on Jed Patrick Mabilog
Malacañang Photo

“What the President means when he says he’ll kill, is just to emphasize the point that all those who committed crimes should be punished,” Roque said.

In a transcript of a speech in Tarlac City on March 7, Mr. Duterte, apparently referring to Mabilog, said “I have been looking for him.”

“He did not come home because I will really kill him,” the President said during the rites for the 145th founding anniversary of Tarlac City.

Mabilog had been removed from office by the Ombudsman for failing to fully declare his wealth but the President continued to tag him as one of many government officials involved in drugs.

“Remember that shabu (crystal meth) is a commodity for the poor,” said Mr. Duterte, according to the transcript posted online by the Presidential Communications Office. 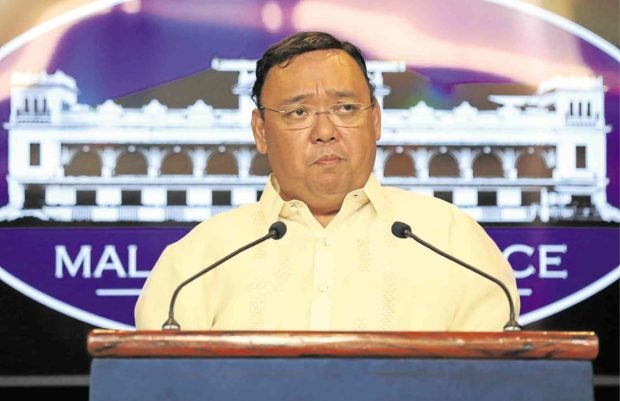 What the President means when he says he’ll kill is just to emphasize the point . . . Harry Roque
Palace spokesperson

“That’s why many of those killed come from poor families. So why are the rich not killed? There have been mayors who were killed. As a matter of fact, there are already two,” he said, referring to Espinosa and Parojinog.

“One did not return, it’s Matibay,” the President said, apparently erroneously pronouncing the name of Mabilog, who had gone into exile, amid fears for his and his family’s safety.

Roque said killing Mabilog was not what Mr. Duterte really meant, although legal remedies were readily available for the former mayor “if he really thinks there’s a threat to his life.”

One of these, said Roque, was to file a petition for a writ of amparo and “ask for protection from our courts.”

Mabilog had repeatedly denied Mr. Duterte’s allegations against him but Roque said “flight is evidence of guilt.”

“If he wants to clear his name, he should come home and face the accusations against him,” he said.

No criminal case, however, has been filed against the former mayor after Mr. Duterte first made public his accusation in August 2016.

“I don’t respond to people who are not worthy of response,” he said. “She’s one of them.”

In an earlier Facebook post that did not mention Mr. Duterte, Marivic said the family is “afraid because you will really kill us.”

“Insinuations and persecution based on false and made-up evidence is your game,” she said.