Brazil icon to fly to PH in balloon form 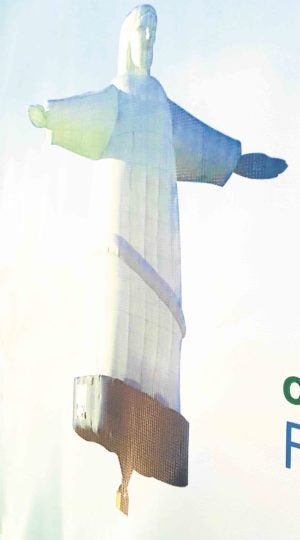 This balloon replica of Brazilian icon Christ the Redeemer will fly at the Lubao International Balloon and Musical Festival 2018
TONETTE T. OREJAS

LUBAO,Pampanga — Christ the Redeemer — at least the balloon version of the iconic monument in Rio de Janeiro in Brazil — will grace the skies of Pampanga province for the first time at the Lubao International Balloon and Musical Festival on March 23 to 25.

The Christ balloon is 43 meters high and is taller than the 30-meter statue in Brazil’s Corcovado mountain, according to Eugene Lee, the festival’s assistant event director.

Weighing 200 kilograms and with a volume of 105,000 cubic feet, the balloon would be flown by Brazilian pilot Renato Mathies Gongalves, Lee said.

At least 30 balloons from 20 countries were set to fly from Pradera in Lubao, in the fifth staging of the local balloon event that draws foreign participants, said Noel Castro, president of the Lubao International Hot Air Balloon Inc. Some of the balloons would be shaped as an owl, a clown, a lobster and a rocket.

Castro said organizers expected a smaller number of balloonists this year because the Putrajaya Balloon Festival in Malaysia, which is held close to the dates of the Lubao festival, had been cancelled.

The 2017 Lubao festival drew 45 balloonists, most of whom also took part in the Malaysian event.