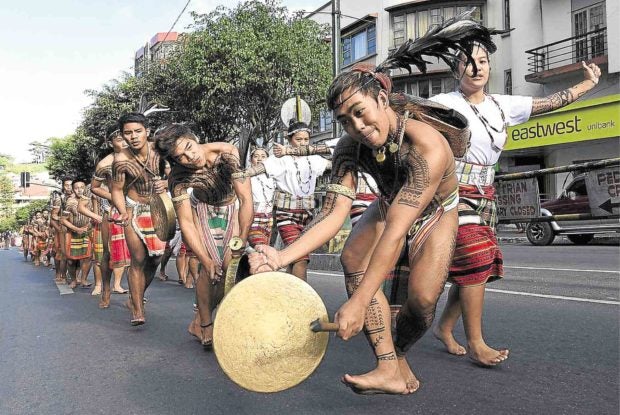 Community festivals and gatherings in the Cordillera region are not complete without the sound of gongs. —EV ESPIRITU

MANKAYAN, Benguet — Seventy-three years ago, blacksmith Hildo Galino and four other men scoured the mountains of Barangay Bedbed here for bombs that were used in World War II.

They figured out that the iron shells of the spent bombs could be flattened and forged into gongs, the most essential musical instruments in the Cordillera region.

“It was a long and hard trial-and-error until we perfected the craft and eventually shifted to bronze,” said Galino, 85.

Decades of refined craftsmanship have earned Bedbed, a village of a little over 1,000 people, the title of “gong factory” in the Cordillera. Their instruments have been sought by families and groups across the country and overseas.

The largest gong in the country, which has become a tourism attraction in Rizal town, Kalinga province, was made at Sitio Payeo in Bedbed by Marvin Onio. It measures around 2 meters in diameter and weighs 150 kilograms.

Galino and Monte, however, had difficulty passing on their craft. “We realize that there are only five young people who are interested in gong making,” Monte said.

At present, only five gong makers—all of them elderly—operate four forges in the village.

The shops, which also make farming implements, maintain traditional tools and equipment. The only upgrades are hand-cranked mechanical blowers that have replaced hand-pumped bellows.

“We cannot just give up and let the craft die. How will our grandchildren perform the  ‘tayaw’ (native dance) without gongs?” said Temo-an Canabel, 69, another gong maker.

Last year, the National Commission for Culture and the Arts approved a proposal by the local senior citizens’ association to train out-of-school youth in the art of gong making. The proposal covered the cost of training materials, especially expensive bronze plates, said Monte, who is also the association president.

Fifteen apprentices enlisted and finished the two-week training on Feb. 2, according to Benguet tourism officer Clarita Prudencio. She said the apprenticeship gave young people livelihood and made them bearers of a waning tradition.

Monte said the training was merely the initiation to long years of honing and mastering the craft, so these apprentices could keep the embers of Bedbed’s trade secret glowing.

Bedbed gong makers had perfected the technique of making the gongs resonate fuller and not emit a scattered clang, which many Cordilleran villagers preferred, said Prudencio.

Their trade secret was passed down by the first gong makers during World War II. Skills and knowledge were passed from father to son, like Monte who, at 27, took charge of the family’s shop when his father died in 1978. His father also inherited the shop.

The first bronze and brass gongs were bartered by the Chinese as early as the 16th century and were considered family heirlooms, according to Mayor Paterno Luspian.

In the 1960s, a merchant named Langakan from Barangay Abatan in Buguias town sold bronze sheets from Manila, which helped jump-start the manufacture of bronze gongs.

Monte said the increasing demand for gongs had never waned. Non-Cordillerans have been placing orders for collectors who use these as tokens or for display. A set of gongs is priced from P8,000 to P27,000.