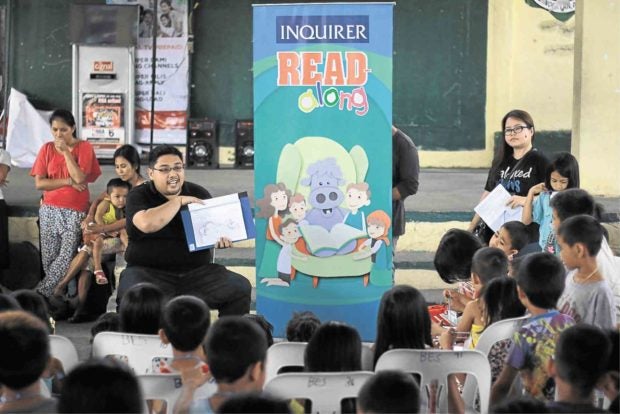 GUINOBATAN, Albay — Living in temporary shelters has been a challenging experience, especially to children who still have limited understanding of their plight after fleeing their homes from an eruptive Mayon volcano.

So when the Inquirer Read-Along session was held at Lower Binogsacan Elementary School here on Feb. 24,  some 90 child evacuees saw heroes in the characters of the stories that offered them hope and courage in the time of uncertainty.

The young listeners, aged 4 to 11, are among the evacuees who left their villages within the 6 to 7-kilometer-radius danger zone of Mt. Mayon and have been staying in 57 shelters around Albay since January, after the Philippine Institute of Volcanology and Seismology (Phivolcs) raised Alert Level 4.

Marc Gemro Bellena, president of the American Field Service-Intercultural Programs Philippines in Legazpi, read Jeannette C. Patindol’s “Tight Times,” a story about a family of mice coping with changes after the father lost his job.

The mice managed to survive the financial crisis, strengthening their family bond and getting support from their neighbors.

The children laughed while it rained, seeing the actor portraying Carancal’s role defeating a wild pig—the cause of the earthquake—and help rebuild his community.

“The stories highlight the value of sharing one’s blessings,” said Bellena, who is also a regional monitoring and evaluation officer of the Department of Social Welfare Development’s antipoverty program. “The underlying thought of [the stories] is that hardships do not last. We need to brace and weather the storm.” 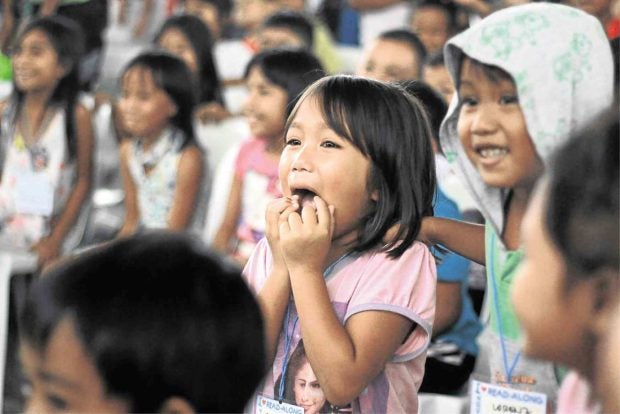 The children came from the villages of Masarawag, Maipon, Muladbucad Grande and Muladbucad Pequeño in Guinobatan. Most of them expressed their gratitude to various organizations who have been helping them in the evacuation center, but they were worried about the homes they left behind.

“We are glad that there are people helping us, but we miss our homes. We are afraid that we will have no home to return to when this is all over,” said Renz Milarpis, 10.

But Johnrey Magbanwa, 7, and his brother AJ, 6, were aware why they had to live in the evacuation center. Their mother, Josephine, died of complications from a lung disease triggered by the heavy ashfall from the volcano.

They spend time with their playmates in the evacuation center.

“They are also not comfortable sleeping and their school participation is affected,” Olavario said.

The DSWD conducts psychosocial activities, such as games, art sessions and other educational events, among the evacuees.

Bellena said the children, especially those who joined the read-along session, did not seem to show signs of trauma.

“They were attentive. Though playful, they were participative,” he said.