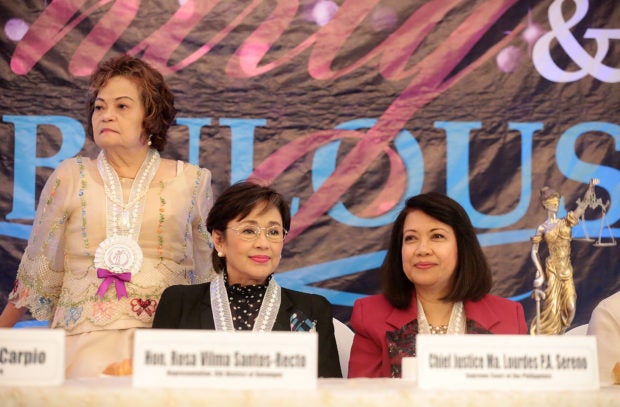 IN A NUTSHELL: Chief Justice Sereno delivered a speech taking a swipe at her detractors ♦ Associate Justice De Castro says the content of Sereno’s speech violates the “sub judice” rule for discussing matters that are under trial

Supreme Court (SC) Associate Justice Teresita Leonardo-De Castro on Thursday did not mince words in expressing her dismay over Chief Justice Maria Lourdes Sereno’s speech during the 30th anniversary of the Philippine Women Judges’ Association (PWJA) and its 23rd national convention at the Manila Hotel.

De Castro, who is also PWJA president, said Sereno should not have used the event to discuss her case, which she claims is “sub judice.”

Under the jurisprudence, the sub judice rule restricts comments and disclosures pertaining to pending judicial proceedings.

“I am very sorry that the Chief Justice has taken this opportunity to discuss a matter which is sub judice. We have given her all the courtesy and I sincerely hope that she should have not dealt with the matter that is pending in the Court,” de Castro said after the speech of Sereno.

In her speech during the event that coincided with the celebration of the International Women’s Day, Sereno criticized her detractors for their attempt in resorting to a shortcut in ousting her.

(They started it, how come they do not want to finish it? Isn’t it too early to admit that they got nothing except utter failure, thus, they resort to all sorts of gimmick to get what they wanted.)

Sereno was applauded by the women judges. She was supposed to be greeted by the organization’s President who is De Castro but she went straight to the podium to tell Sereno off.

When sought with a reaction, Sereno in an interview over CNN Philippines said “hindi kailangan ng reaction. Why spend energy on that.” /jpv

Sereno delivers most powerful speech yet; not all peers happy