Voting 38-2 with zero abstentions, majority of the members of the House panel affirmed on Thursday that there is probable cause in allegations that Sereno committed culpable violation of the Constitution, betrayal of public trust, corruption, and other high crimes.

Lawyer Lorenzo Gadon hurled these allegations against the country’s top magistrate in an impeachment complaint he filed at the House of Representatives late last year.

Only Dinagat Islands Rep. Kaka Bag-ao and Quezon City 6th District Rep. Jose Christopher “Kit” Belmonte voted against the finding of probable cause in the impeachment complaint against Sereno. 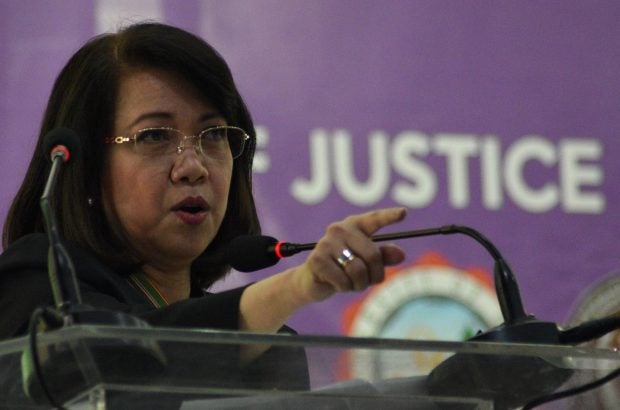 The committee decided to immediately proceed to voting, and not discuss every allegation in the impeachment complaint. This after House justice panel vice chair Rep. Doy Leachon pointed out that debating on each of the 27 accusations “would just be a repetition of what have been” done in the past 15 committee hearings to determine the probable cause in the complaint

Garbin said “if the committee finds a vote of the majority of all its members, then the probable cause exists on the basis of the evidence adduced before the committee; it shall submit its report setting for the articles of impeachment, otherwise the complaint shall be dismissed.”

Garbin also said this rule “presupposes” that the members “will vote in totality not individually.”

Crisologo conceded and withdrew his motion.

It only took about an hour for the House committee to decide on the probable cause in the impeachment complaint against Sereno.

House justice committee chair Oriental Rep. Reynaldo Umali has tasked the panel vice chairpersons to craft the articles of impeachment as well as the final committee report. He gave them until March 14 to submit the documents.

Aside from Leachon, Reps. Vicente Veloso, Henry Oaminal, Arnulfo Fuentebella, and Strike Revilla are also vice chairpersons of the House committee on justice.

Thereafter, the articles of impeachment and committee report would be presented before the House plenary for voting.

If the report gets one-third votes of the entire House members, the lower chamber would then transmit the impeachment complaint to the Senate, which would consequently turn into an impeachment court.

Sereno, who is  on an indefinite leave, is also facing a quo warranto petition before the Supreme Court that seeks to nullify her appointment for allegedly being unqualified as chief of the high tribunal.