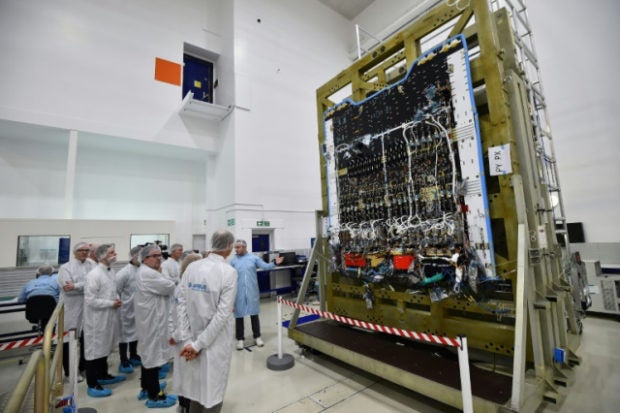 Brexit could lead to a loss of contracts for British space firms as EU-funded work must go to EU nations. Image: GLYN KIRK – AFP/File

While the Union Jacks on the wall indicate they are firmly on British soil, at an Airbus cleanroom in Portsmouth, the Eutelsat Quantum satellite is very much a European endeavor.

Parts for the European Space Agency-led venture come from Spain, it is built in Britain and will be taken to France for testing ahead of next year’s launch.

“The thing about space is that in order to succeed and achieve, really, you have to be part of international partnerships and cooperation,” Peake told AFP.

The agency is not part of the European Union — it has 22 members plus cooperating states — but they are closely aligned and Brexit has cast doubt on Britain’s role in regional collaboration.

Graham Turnock, chief executive of the UK Space Agency, is confident Britain will keep its place in ESA but is less certain about the country’s broader EU ties after Brexit in March 2019.

“A lot will depend on what happens over the next few months in the negotiations, but we have said that we want to look forward to continue cooperating on science, research and technology including space,” he told AFP.

“In many ways, the ball’s in the EU’s court as to whether that’s reciprocated or not.”

Talks between Brussels and London on their future relationship are due to start within weeks.

British Prime Minister Theresa May has promised to continue contributing to the space program for the current EU budget period, which runs until 2020, as part of a transition period.

“We will continue to participate in programs that are funded by that (budget), and that includes space,” she told MPs on February 28.

“But we will also be discussing with the EU how we can build on our successful co-operation on space as the negotiations proceed.”

Brexit is already having an impact on Britain’s role in the European space industry, with the decision to move the backup site of Galileo, the EU’s Global Satellite Navigation System, to Spain.

EU commissioner Elzbieta Bienkowska said in January that relocating the Galileo Security Monitoring Centre was a “necessary operational step to ensure business continuity and preserve the security of the Galileo system”.

“As part of the (Brexit) negotiations there are some programs that are going to be very carefully negotiated, two in particular are Galileo and Copernicus, which the UK is heavily involved in and hopefully will continue to be so,” said Peake.

While ESA is separate from the EU, the agency implements the two programs as well as others by Brussels, and as a result sources around 20 percent of its 5.6 billion euro ($6.9 billion) budget directly from the European Commission.

Simon Henley, president of the Royal Aeronautical Society, spelled out the challenges of such a set-up for British companies.

“Many of the (ESA) contracts, including Galileo, are EU funded and it is a requirement that the companies who participate and get funding and bid for contracts are part of an EU country,” he told a parliamentary committee in November.

“We are already seeing contracts being turned away from UK industry because of the uncertainty.”

Airbus is keen to stay involved in European programmes in the long term, but UK managing director Colin Paynter said “we all have doubts and we all want to know what’s going to happen for certainty”.

Looking beyond Brexit, however, he pointed to increasing government funding — the UK Space Agency budget this year is £387 million (434 million euros, $537 million) — as a sign that the space sector would survive the EU divorce.

“I think the UK is going to have a pretty bright future, actually, in space,” he told AFP. NVG