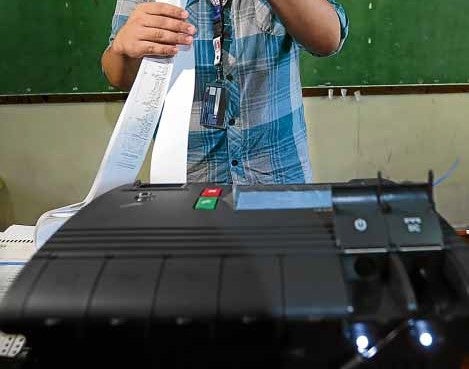 Senate Majority Leader Vicente “Tito” Sotto III exposed on Tuesday the alleged irregularities during the 2016 elections that could be considered a “case of electoral sabotage” if proven true.

Sotto said a “concerned” and “impeccably reliable source” handed to him confidential information as to the irregularities that have allegedly “altered” the results of the last elections.

“What I am about to present to you may or may not be gospel truth but very accurate information and if these allegations are serious enough and are proven to be true after due investigation, then we have a case of electoral sabotage for the conduct of the 2016 elections,” he said in a privilege speech.

“If we don’t do anything to clear the doubts as to the legitimacy of the previous election, then we put at risk the accuracy of the 2019 elections,” he said.

On the alleged early transmission of vote, he said , the Board of Canvassers should have convened starting at 3 p.m. of May 9, 2016 but as early as May 8, 2016, there was already a “transmission activity.”

He said the IP address, 10.11.55, was the one that transmitted the data while 0507.ccs.pili2016pinas.net was supposedly the receiving end.

The transmission code, he said, pointed to the Consolidated Canvassing System (CCS) of the Municipality of Libon, Albay.

Sotto said the early transmission continued until the morning of May 9, which was still prior to the official conduct of the election.

As to the second allegation of “foreign access” in the election servers, Sotto said there were alleged “series of access before, during and after the election.”

The senator noted that a day before the May 9 elections, a username “e360sync” allegedly made a “malicious activity” which he said was a “critical intrusion to a computer system.”

“If you do this in your own home computer, your firewall or antivirus will alert you,” he explained.

“So the question now is who is username e360? Apparently e360 is a server in amazonaws.com which is a cloud computing service located mainly in the United States.”

The username e360, he said, “looks very similar to a software product of the Philippine election provider ‘Smartmatic.’”

“To conclude the second issue, our election servers were allegedly accessed remotely and information gathered were copied and submitted to a server in the amazon cloud services in the United States,” Sotto said.

The senator then urged the Senate to conduct an investigation on the matter and asked that election and Smartmatic officials should be subpoenaed to the probe.

“It is high time that the proper Senate committee investigates the Automated Election System and subpoena Comelec and Smartmatic to provide the relevant data as regards these allegations,” he said.

“These issues cannot be ignored as it weakens the propriety of our automated election system. We must ascertain the accuracy of these allegations as to either make the responsible officials accountable or finally put to rest the questions clouding the results of the 2016 election.”

Sotto believes that the outcome of any investigation on the matter would lead to a “more accurate and transparent system and results for the upcoming midterm polls.