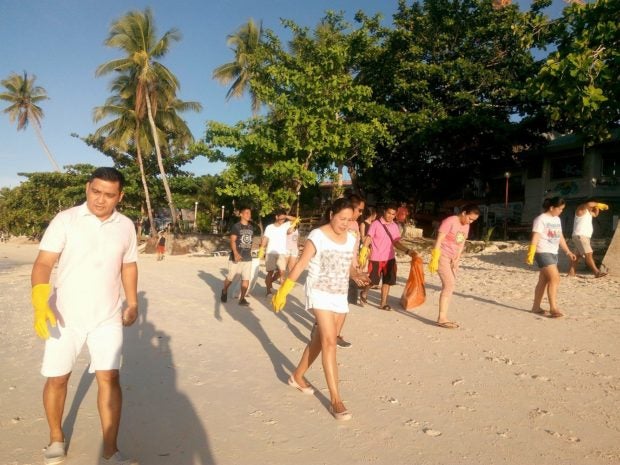 Hundreds of volunteers composed of students, the public and authorities gathered on Panglao beach early Monday to collect garbage at the coastlines.

Tarcisia Guirigay, 65, a resident of Barangay Tawala in Panglao town, woke up at 5 a.m. on Tuesday to join her neighbors in picking up garbage along the coastline.

“I helped in the cleanup because I want our town to be clean. It cannot be prevented that tourists would throw their garbage anywhere because they don’t know where to put these,” she added.

Among the trash she picked up were cigarette butts, plastic beverage bottles and other plastic containers which were segregated properly.

“We do not need laws, regulations, or even reminders if we truly love Bohol,” said Chatto reminding everyone of the role of enforcement agencies, investors, and Boholanos during show of force to make sustainable tourism happen for Bohol.

He reiterated provincial government support to local governments in the implementation of laws.

“Development is a balancing act as its consequences bring displacement. Our role is to preserve the present for future generations,” said Chatto.

At least 400 business establishments in Panglao, including illegal settlers, were found to have been violating environmental laws during a validation conducted by the Environmental Management Bureau (EMB) of the Department of Environment and Natural Resources (DENR) and the municipal governments of Panglao and Dauis. /lb