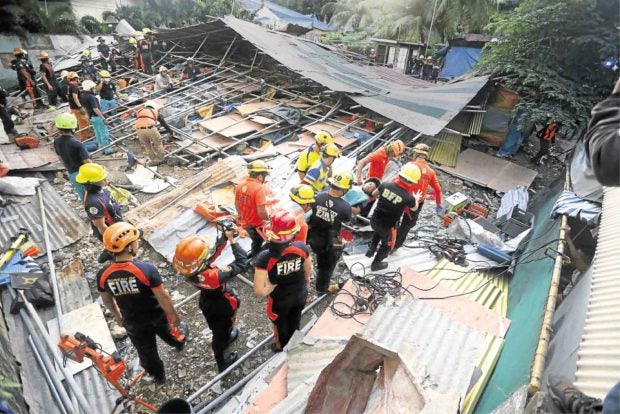 SEARCH FOR SURVIVORS Members of a Bureau of Fire Protection rescue team search through a tangle of metal poles, plywood and iron sheets for survivors after a bunkhouse of a construction company in Barangay Lahug in Cebu City collapsed on Tuesday. —LITO TECSON/CEBU DAILY NEWS

CEBU CITY — Utility worker William Bahao was sound asleep past 2 a.m. on Tuesday when he was jolted by a crackling sound from the roof of a bunkhouse.

A few seconds later, the four-story bunkhouse, where he and more than 160 construction workers were staying, crumbled at Barangay Lahug here.

Five construction workers were killed while four others were seriously wounded following the collapse. At least 154 others suffered minor injuries, reports said.

Rescuers sent to the construction site said Iveen Villarin, 23, a resident of the City of Naga; Francisco Diapera, 43, of Toledo City; Carlos Caliwa, 61, of Manjuyod town, Negros Oriental province; Crisenciano Silomen, 57, of Trinidad town, Bohol province; and Jason Bacalso, 22, of the City of Naga died after they were pinned down by debris.

The construction firm J.E. Abraham C. Lee Construction and Development Inc. put up the bunkhouse in September last year so workers in its project sites will have a place to stay.

Butch Abaya, the construction firm’s project engineer, said the structure’s foundations were not buried but were supported by metal braces and clamps.

“That has been the standard practice for bunkhouses,” he said.

Abaya said the bunkhouse was stable, noting the firm had yet to determine why it collapsed. “This has been here for some time now, and yet nothing happened until this incident,” he said.

It took rescuers close to six hours to pull all bodies from the rubble.

“It could have been longer if the bunkhouse was made of concrete. It just happened that the foundations were made of metal poles so many workers managed to breathe,” said Nagiel Bañacia, chief of the Cebu City Disaster Risk Reduction and Management Office.

“We will focus the investigation on why the bunkhouse collapsed,” he said.

Bahao said he was sleeping on the third deck of the structure made of metal poles and plywood when the structure gave way. He said he managed to squeeze out of the debris.

“I thought I would die but I pushed myself to get out of the poles,” said Bahao, 58, a native of Guihulngan City in Negros Oriental.

“I’m grateful to God for saving my life. Perhaps, it’s not yet my time to die,” said Bahao, who kept a small image of the Blessed Virgin Mary and a rosary inside his bag, which he used as a pillow.

Kaye Vergara, human resource officer of the construction firm, said the company would shoulder burial and medical expenses of the casualties. “We will take care of all their needs,” she said.

Josefa Ylanan, head of the the Office of the Building Official in Cebu City, ordered the suspension of all projects undertaken by J.E. Abraham C. Lee Construction and Devleopment Inc. following Tuesday’s incident.

Joseph Bernaldez, city legal officer, said they discovered that the contractor had no business permit since 2001, adding that it also failed to secure another permit to construct a bunkhouse.

“Under the Building Code, contractors have to secure permits for its bunkhouses. The way you look at it, its bunkhouse is not really for workers, but a storage room for construction materials,” he said. —With a report from Nestle Semilla