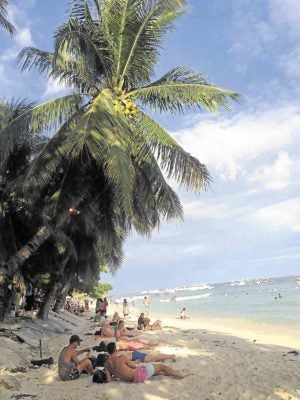 Panglao Island in Bohol province is among the top tourist drawers in the Visayas. —LEO UDTOHAN

Most of the 400 violators were found on Alona Beach at Barangay Tawala in Panglao, said Degoma, who joined the inspection with DENR personnel.

She said the validation also revealed the problem of illegal settlers, with at least 20 families found to be living in the mangrove area at Barangay Doljo, Panglao, and another 1,000 families staying along the coastline at Barangay Totolan, Dauis.

The EMB last week issued notices of violations to 81 tourism-related establishments on Panglao Island. Of these, 33 establishments were found to have discharge permits from the EMB but their wastewater facilities were not functioning.

Environment Undersecretary Jonas Leones, DENR spokesperson, said the agency was still collating the actual number of violators on Panglao Island to ensure that its list of environmental violators was up to date.

He assured that due process would be followed and that violators would be given an opportunity to correct any violation or noncompliance.

“They will be given time to answer and to do corrective measures,” Leones said in a telephone interview on Monday.

In a notice of violation sent to business operators on Feb. 27, DENR Central Visayas Director William Cuñado required representatives of erring establishments to attend a technical conference on March 8 at the provincial environment and natural resources office in Cortes town.

Leones said voluntary demolition of illegal structures on Panglao Island was a better way to address the problem. “It’s the best option [for business owners] than [waiting for the government] to enforce the law [and] tear down their properties,” he said.

Panglao Island, which is composed of the towns of Panglao and Dauis, continues to draw tourists despite its environmental problems. The DENR and local governments have scheduled a massive cleanup drive on Tuesday in a bid to protect and save Panglao.

Leones assured the situation in Panglao, known as Bohol’s tourism jewel, was still manageable compared to the environmental problems that Boracay Island in Aklan province was facing.

Earlier, President Duterte called Boracay a “cesspool,” citing its dirty water as a result of uncontrolled development and congestion on the island. Government officials were mulling to close the island to stop its further degradation.