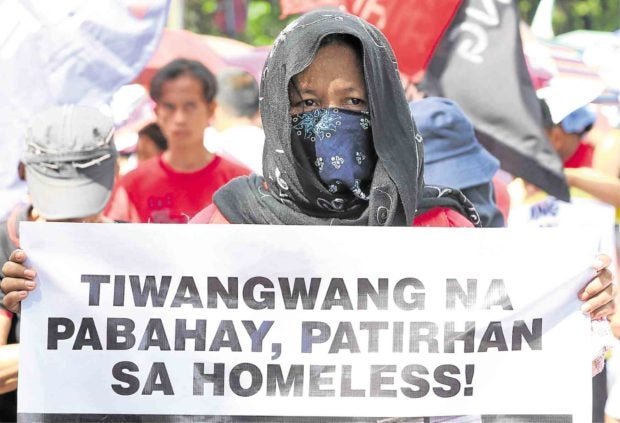 Kadamay members have been pressing the government to distribute idle units in its housing projects to the homeless.EDWIN BACASMAS

They have been told about a Senate resolution that authorized the National Housing Authority (NHA) to reallocate houses awarded to policemen, soldiers, firemen and jail personnel.

Elsie Trinidad, NHA spokesperson, said a law was needed to redistribute 1,700 houses at housing sites in Pandi town in Bulacan, which had been allocated for uniformed personnel.

President Duterte had urged the military and the police to relinquish their claims in favor of the Kadamay families and avoid conflict. Kadamay members took over close to 6,000 houses in six NHA housing sites last year.

“The state of homelessness should be declared a national humanitarian emergency. We are calling for the distribution of all idle houses in the country to the homeless as an immediate step toward addressing the housing crisis. It is criminal to let them rot away while our country has the most [number of] homeless in Asia,” Kadamay said.

On Monday in Pampanga province, members of the Metro Clark chapter of Kadamay from the cities of Mabalacat, Angeles and San Fernando submitted housing applications to the NHA Pampanga office.

Kadamay members have targeted idle units at San Fernando Ville in Angeles and Xevera subdivisions in Bacolor and Mabalacat.

“NHA staffers accepted our applications. We don’t know the process that we should undergo to be able to get the units but it is certain that we shall be going back here to make noise until we are given the units,” Edona said.

Ines Gonzales, NHA Pampanga district officer in charge, said Kadamay applications would have to wait until the NHA completed its inventory of awarded and occupied units in housing projects for uniformed personnel.

The NHA extended the deadline for the inventory from Feb. 28 to March 2 to allow soldiers and policemen from the provinces to present proof of occupancy. —REPORTS FROM CARMELA REYES-ESTROPE AND TONETTE OREJAS