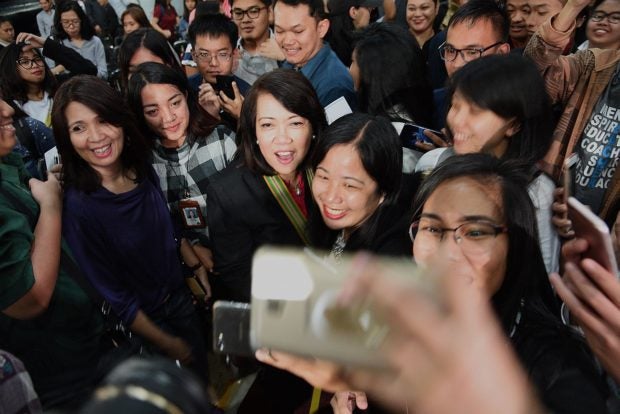 RARING FOR A FIGHT Law students cheer and take selfies with Chief Justice Maria Lourdes Sereno at the University of Baguio. In a speaking engagement on the campus on Friday, the embattled magistrate rejected calls for her resignation and asked political leaders to give her her day in the Senate impeachment court. —EV ESPIRITU

A group of Christian churches on Saturday called on Filipinos to join a rally to show support for embattled Chief Justice Maria Lourdes Sereno.

The Philippine Council of Evangelical Churches (PCEC) said its mass action dubbed “Martsa ng Bayan, CJ Ipaglaban” — a march in defense of the embattled magistrate — would be held on Tuesday in Quezon City.

“We, the PCEC, believe that she is innocent of the allegations against her. We continue to stand with Sereno,” said PCEC national director Bishop Noel Pantoja. “Let us all show our support for her and our country’s democracy. Let us all gather peacefully and prayerfully for the sake of truth, righteousness and justice in our country.”

The PCEC expressed its support for Sereno in September last year and also endorsed her appointment in 2012 as Chief Justice, believing that she would uphold and defend the rule of law.

The PCEC rally would be held at the corner of Commonwealth Avenue and Batasan Road on March 6, when the House committee on justice was expected to vote on the impeachment complaint against Sereno.

Various groups had earlier also called for a rally in support of Sereno on International Women’s Day on March 8, calling the mass action a “Solidarity March against the Macho Fascist Dictatorship.”

Benedictine Sister Mary John Mananzan, convenor of the Movement Against Tyranny, in a press conference on Thursday said the impeachment complaint against Sereno was part of President Duterte’s efforts to eliminate opposition to his government.

“All the moves of the government are toward only one thing—to establish an administration without opposition. It is very clear that what they want is to take away the opposition,” Mananzan said.

What was more worrisome is that the impeachment of Sereno was intended to attack the independence of the judiciary, according to Joms Salvador, secretary general of the women’s group, Gabriela.

Impeachment cases were normally filed against officials who have committed “glaring” violations of the law, Mananzan said.

“In this case, there was nothing glaring that had been done (by Sereno),” Mananzan said. “They just filed a case then looked for charges against her.”

Also on Saturday, Lyceum of the Philippines law dean Soledad Mawis said the move by 13 justices of Supreme Court to force Sereno to take an indefinite leave of absence was unprecedented and unsettling as the impeachment process was already ongoing.

“I have no knowledge of any statutory basis where the justices can ask any justice to take an indefinite leave,” Mawis, who is also chair of the Philippine Association of Law School, said in an interview with ABS-CBN News Channel on Saturday.

“This unsettles things that are already settled. As far as I know under the Constitution you can only remove a sitting justice of the Supreme Court through an impeachment proceeding,” she said.

“Members of the high court would not have any power to remove any of the members because it is very clear in the Constitution: a justice may only be removed through impeachment,” Mawis said.

Although the decision was an “internal matter,” it was unclear whether it was a form of disciplinary action against Sereno, she said. —WITH A REPORT FROM DONA Z. PAZZIBUGAN