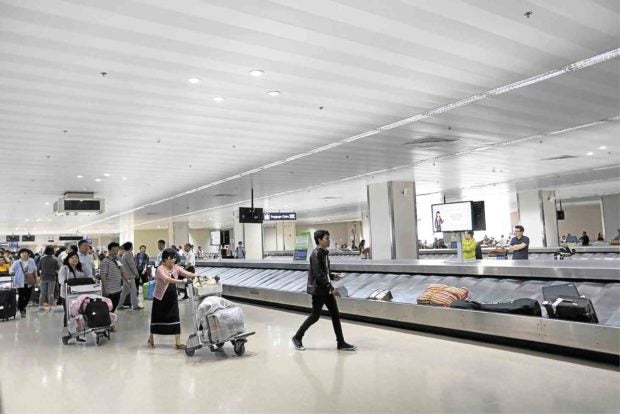 Arriving passengers retrieve their checked-in luggage from the baggage carousel at the airport.—JOAN BONDOC

There is no stopping the exit of the Miascor ground handling services company from the Ninoy Aquino International Airport (Naia).

Up to President to decide

The five firms might also absorb some of the 4,000 Miascor employees and could also purchase the equipment left by Miascor.

Monreal told reporters that it would be up to President Duterte to decide if he wanted to reconsider his decision.

Miascor officials have said they would appeal to Malacañang. Monreal said he respected such a move.

“We need to protect airport travelers from baggage theft, especially overseas Filipino workers who work so hard to earn a living, and to make sure that potential tourists and investors are not turned off by such incidents at the airport,” Monreal said, defending the contract termination.

He also denied accusations that he had something to gain from the implementation of the closure, adding that it would be the airlines that  would chose their ground handlers.

The contract between MIAA and Miascor expired on Mar. 31, 2017, and was extended on a month-to-month basis.

The President ordered the contract terminated once and for all  after learning of  the pilferage committed by Miascor employees at Clark International Airport, where the victim was an OFW from Canada.

Monreal, referring to a theft at Naia involving Miascor employees who victimized the Turkish foreign minister’s wife, said that if it were up to him, he would have canceled Miascor’s accreditation on the same day.

According to him, MIAA  issues around 1,500 monthly passes to Miascor employees going on duty at the Naia complex.