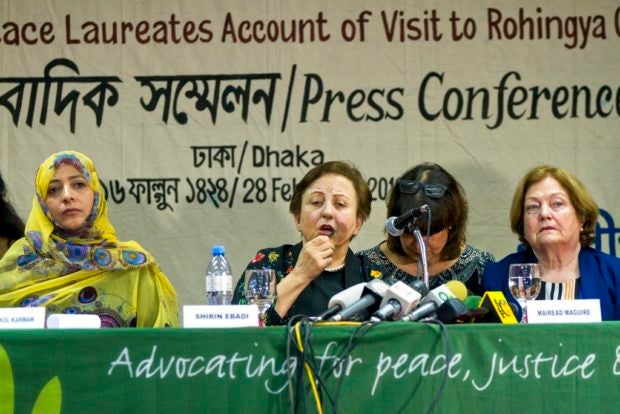 Suu Kyi does not oversee her country’s military or its security operations that set off the refugee exodus but the laureates said as Myanmar’s leader, she cannot avoid responsibility.

Tawakkol Karman of Yemen urged Suu Kyi to “wake up” or “face prosecution,” and Northern Ireland’s Mairead Maguire and Iran’s Shirin Ebadi promised to work to bring those responsible to justice. The laureates spoke at a news conference in Dhaka on Wednesday during their weeklong trip to Bangladesh to visit the camps where the Rohingya are living.

All three were emotionally charged as they unanimously called the violence against Rohingya in Myanmar “genocide.”

“There is no other definition, it is genocide, genocide against innocent people,” Karman said. “Millions of people (have) been displaced from their cities, women (have) been raped, all the women, we met like 100 women, all of them (have) been raped.”

She said they were overwhelmed as they talked to the children.

“Most of the children we met … fled to Bangladesh without their families. Their fathers, their mothers (have) been killed, been murdered,” Karman said.

Karman, one of three recipients of the 2011 prize for women’s rights advocacy, said Suu Kyi should not be silent.

“She did not tell the truth to the world. She should stop her silence, she should wake up and stop this genocide,” she said.

Some 700,000 Rohingya have fled to Bangladesh since late August, when Myanmar’s military retaliated for deadly attacks by a Rohingya insurgent group. Myanmar’s government has denied atrocities and said the military was conducting “clearance operations” against terrorists.

Suu Kyi has spoken generally about her nation making progress toward peace but has not mentioned the Rohingya, who are not recognized by Myanmar’s government.

Maguire, who co-founded a Northern Ireland peace group and shared the 1976 prize, said the three laureates were looking for legal options to ensure justice. “We plan to take Myanmar’s government to the International Court of Justice,” she said.

Ebadi, who was Iran’s first female judge and the 2003 Nobel laureate, blasted her native country and other Middle Eastern nations for not doing enough for the Rohingya, a Muslim ethnic group long persecuted in Buddhist-majority Myanmar.

Ebadi said Myanmar was not a party to the statute that set up the International Criminal Court but could be referred to the court by the United Nations Security Council.

“We want this case to be discussed at the UN Security Council and there is sufficient evidence for this to take place,” she said.

The laureates said they were willing to meet with Suu Kyi to convince her to stop the genocide and give Rohingya full rights, including citizenship. They said they got no response to earlier efforts but would again push to obtain visas to visit Myanmar and Rakhine state, where the security operations took place.

The laureates also met Bangladeshi Prime Minister Sheikh Hasina on Wednesday and promised to work toward solving the crisis.

In November, Myanmar and Bangladesh signed an agreement to gradually repatriate Rohingya in “safety, security and dignity,” but the process has been delayed in part because of security concerns.

Bangladesh said it will not repatriate any Rohingya against their will but wants the international community to continue to pressure Myanmar to create conditions for a sustainable repatriation.            /kga