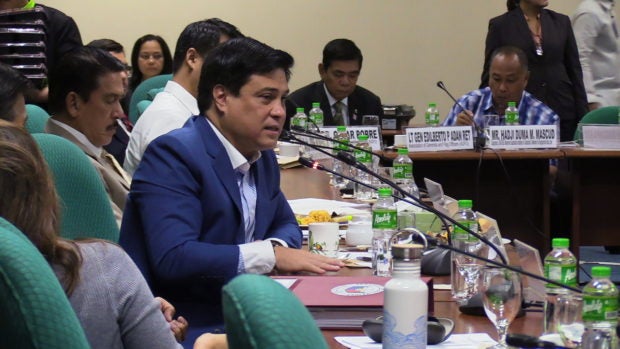 Calling the Bangsamoro Basic Law (BBL) an “advent of a new era for Mindanao,” Sen. Juan Miguel Zubiri said the Senate remained on track to passing the legislation as it was introduced before the plenary on Wednesday.

“What we passed as a committee report is not 100-percent BTC [Bangsamoro Transition Commission] version. But we simply say that it’s 96-percent BTC. All the important provisions are there. If we added [other provisions], it was just to strengthen,” Zubiri told reporters in a press briefing.

Zubiri, who chairs the subcommittee on BBL said Senate Bill No. 1717, under Committee Report No. 255, was a “product of 11 public hearings, six whole days of technical working group meetings and several thousand man-hours of labor.”

Six of the public hearings were held in Marawi, Cotabato, Tawi-Tawi, Basilan, Sulu and Zamboanga City.

In the same press conference, BTC Chair Ghazali Jaafar expressed confidence that the submission of the committee report would lead to Senate approval of the BBL.

“And the BBL is not only necessary. But we believe it’s very important and urgent because we consider this a formula for peace in Mindanao,” Jaafar said.

“And with the passage of this proposal, it will address the peace situation in Mindanao and pave the way for realization of the dreams of the Bangsamoro people and all other people in the region, including Christians, and IPs [indigenous peoples],” he added.

Zubiri, who sees the Senate’s passage of the bill by March 21, said they were also confident that no provision of the BBL would be unconstitutional.

He also said the proposed measure would provide mechanisms to audit the P72 billion automatically-appropriated annual block grant or development fund for the Bangsamoro government.

According to Zubiri, the BBL also includes an anti-dynasty provision. But it does not cover mayors and governors because they are “still awaiting a national anti-dynasty law.”

Zubiri hopes to submit the approved bicameral version of the measure before President Rodrigo Duterte’s State of the Nation Address (SONA) in July.

After that, a plebiscite running from 90 to 150 days between September to November will be conducted to ratify the BBL.

Once ratified through a plebiscite, he said the Bangsamoro Transtion Authority (BTA) would be setup, to be followed by an election after three years.

Read Next
No MRT-3 glitch reported in past 7 days, official says
EDITORS' PICK
A delightful blessing!
Gov’t plans to open COVID-19 vaccination for 5- to 11-yr-olds by January 2022
Gov’t eyeing COVID-19 vaccine booster for essential workers, indigents by Dec. 10
Villar Group gears up for AllValue Shopping Party on Dec. 3; around P 1-million promos and discounts up for grabs
Omicron variant detected in more countries as scientists race to find answers
Legarda: Ending Violence Against Women, a cause for all
MOST READ
Omicron poses ‘very high’ global risk, countries must prepare–WHO
Quiboloy warns of ‘much worse than Omicron virus’ if his ‘persecution’ is not stopped
Bongbong Marcos’ conviction in tax case not a crime involving moral turpitude — lawyer
Marcoleta defends pol ads on ABS-CBN
Don't miss out on the latest news and information.