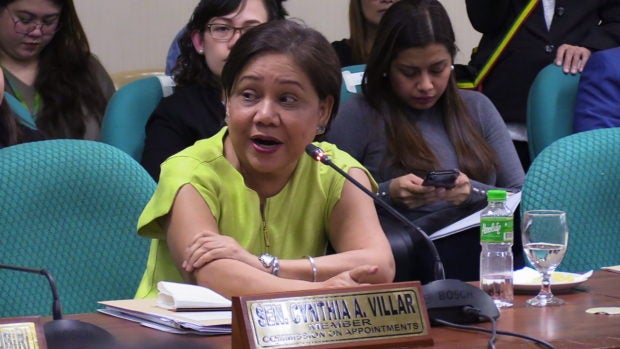 To immediately bring back the National Food Authority’s (NFA) cheap rice variety in the market, Senator Cynthia Villar urged its policymaking body to increase the agency’s buying price for palay while it waits for shipments of imported rice.

Villar said this would enable the agency to quickly replenish its stocks since it would be able to compete with private rice traders who buy palay from local farmers at P18 to P22 per kilo as against the NFA’s current buying price at P17 per kilo.

In a Senate hearing on Tuesday, the senator, who chairs the committee on food and agriculture, said the agency must have a short-term solution to aid poor households who depend on subsidized rice.

For her, this is “the most immediate solution” to solve the NFA rice shortage.

Asked whether Villar’s proposal to hike NFA’s procurement price would be approved, National Economic and Development Authority Assistant Secretary Mercedita Sombilla, who is part of the NFA council, said it was “most likely.”

“We will most likely approve this but the council needs to discuss it first. If ever, the hike will just be temporary to address the shortage,” she said.

Sombilla noted that even a P1 increase in the agency’s buying price could be inflationary or eventually lead to higher prices of essential food items.

Villar also asked the Bureau of Customs to donate smuggled rice to the agency, specifically those confiscated in the ports of Zamboanga, Cebu, and Subic.

To do this, a directive must come from President Duterte that would allow the agency to give its smuggled rice to the NFA.

The senator also commissioned the Department of Trade and Industry to strictly monitor the movement of prices in the market especially that of rice, as reports from the Philippine Statistics Authority showed prices of rice still continue to shoot up in the past few weeks.

Villar blamed the NFA for causing panic among consumers after it declared that it was experiencing a shortage in its stocks.

“The effect was psychological. If you make a press release saying that you’ve ran out of stock and the people were confused, they panic. They buy more than what they need which led to the increase in rice prices,” she said in a mix of English and Filipino.

“When you issued a press release saying there is no rice, the people didn’t know that you are only talking about NFA only… I have to explain over and over again that there is no rice shortage. It’s only NFA that’s failing to do its job,” she added. /cbb