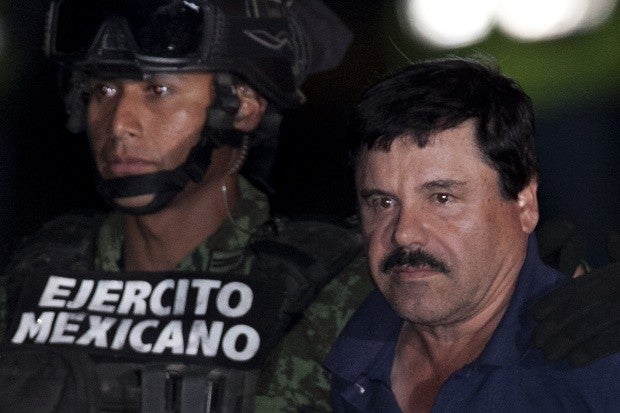 Mexican drug lord Joaquin “El Chapo” Guzman (right) is escorted by soldiers and marines to a waiting helicopter, at a federal hangar in Mexico City last January 8, 2016. The world’s most wanted drug lord was recaptured by Mexican marines that Friday, six months after he fled through a tunnel from a maximum security prison in an escape that deeply embarrassed the government and strained ties with the United States.  (AP FILE PHOTO)

The defense ministry said a shootout erupted when security forces raided a building in Culiacan, the capital of Sinaloa state, where Guzman’s Sinaloa cartel is based.

“They were attacked by a group of individuals who tried to escape,” the ministry said in a joint statement with federal prosecutors.

Two people were killed in the gunfight and three arrested, including two who were wounded, the statement said.

Officials identified one of the dead as Luis Alfonso “N.”

A government source, speaking on condition of anonymity, said the person in question was Luis Alfonso Murillo Acosta, head of security for the Guzman family and a hit man for El Chapo’s son, Archivaldo Ivan Guzman Salazar.

Murillo Acosta is accused of coordinating a September 2016 attack on army troops that killed five soldiers and wounded 12, said the source.

El Chapo, 60, was one of the world’s most powerful drug traffickers.

But his reign was cut short in January 2017 when he was extradited to the United States following his capture after a brash escape from a Mexican prison, his second jailbreak.

Guzman, who is being held in solitary confinement in New York pending trial, told a judge earlier this month that he is struggling to pay for his lawyers.

He is accused of trafficking more than 200 tons of cocaine into the US.   /kga