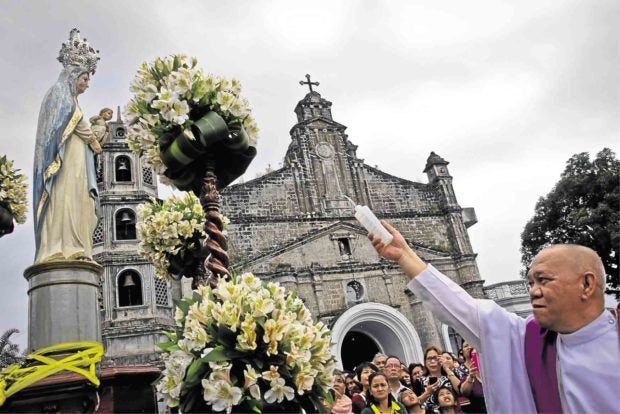 WELCOME HOME Fr. Ricardo de Luna, parish priest of Our Lady of the Pillar in Alaminos, Laguna, sprinkles holy water on the image of the Virgin Mary during a procession to celebrate its homecoming. —CHRIS QUINTANA/CONTRIBUTOR

ALAMINOS, Laguna — A procession and thanksgiving Mass welcomed the return of an image of the Virgin Mary to the Our Lady of the Pillar parish church here on Sunday, more than four years after it was stolen.

“Generations of Catholics from Alaminos are very familiar with this image. It was a silent witness to their baptisms, weddings and other church-related activities,” said Fr. Ricardo de Luna, parish priest.

On its return, the almost a meter tall (3 feet) wooden image, showing Virgin Mary clad in a white garment with a blue mantle while carrying a baby Jesus Christ wearing a white tunic, was secured to a pillar. The paint on the Virgin’s face had faded and chipped, exposing the wood.

“[When I saw the image], I was moved to tears. I told myself, ‘This is indeed our beloved Virgin,’” said devotee Alice Carpio, 62.

Bobbet Escueta, Parish Pastoral Council (PPC) president, said the image was commissioned from an unknown carver in the early 1900s.

The image was originally placed at the main altar but was moved to the adoration chapel when the church was renovated in 1998.

“Since being enshrined at the adoration chapel … it has been very accessible and within reach of devotees who pray and touch her feet,” De Luna said.

But he said the image went missing in September 2013.

A new image was commissioned from Paete, a town known for its wood-carving industry, to take the place of the missing image for novena processions.

Three years after the theft, Jorge Allan Tengco, 46, a resident of Baliwag town in Bulacan province, acquired the missing image from a friend, an art collector who buys and sells religious images.

Tengco had the image displayed at a Marian exhibit in San Jose del Monte City in Bulacan in September last year.

“Through photos on [social media], a parishioner saw a familiar looking Virgin [Mary on exhibit] … and later realized that it looked like the missing Alaminos image. He reported it to parish leaders, prompting the pastoral council president to [visit the] exhibit and confirm that it was indeed the lost image,” De Luna said.

When the image was again displayed in an exhibit at Sta. Cruz Church in Binondo, Manila, parishioners saw photos of the Alaminos image again online.

“This launched a small campaign on Facebook [called] #BringTheVirgenHome, which solicited pictures of the image from the people of Alaminos. Pictures [collected through the campaign] were submitted as proof to the owner,” De Luna said.

After months of finding connections, the PPC was able to reach out to Tengco, who decided to return the image to the Alaminos parish at no cost.

“It belongs to the church. It needs to be returned to its home,” he said.

“We are extremely grateful to the donor for his devotion and for his remarkable generosity,” De Luna said.

TAGS: Our Lady of the Pillar, stolen Marian image