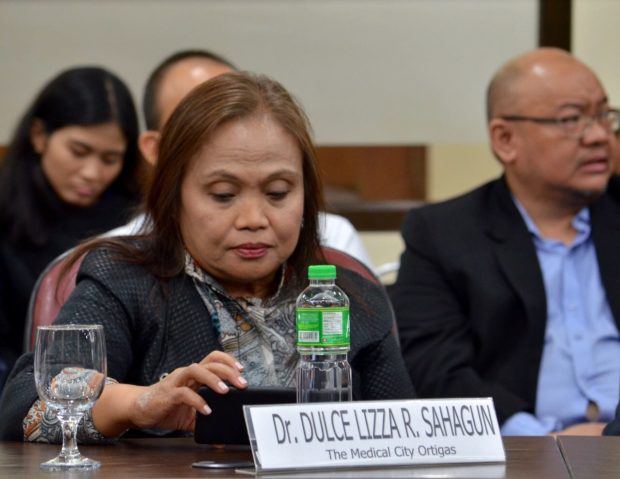 The two doctors who reportedly gave Chief Justice Maria Lourdes Sereno poor marks in her psychiatric assessment have asked the House justice committee to discuss the matter in an executive session.

At the resumption of the House panel hearing on Sereno’s impeachment on Tuesday, Doctors Dulce Liza Sahagun Reyes and Genuina Ranoy expressed their willingness to discuss Sereno’s psychological exam, but in a closed-door session.

House committee chairman Oriental Mindoro Rep. Reynaldo Umali said member would have to discuss their request even as lawmakers offered legislative immunity to the doctors.

But Umali said the committee still has to wait for House Speaker Pantaleon Alvarez’s decision whether he would allow the granting of immunity over the two psychiatrists.

In his impeachment complaint against Sereno, lawyer Larry Gadon cited news reports and alleged that Sereno failed the psychological exam administered by the JBC, receiving a grade of “four” with “five” being the lowest, making her unfit for the Chief Justice job.

“Her psychiatric report described her as ‘dramatic and emotional’. True enough, this has been manifested throughout her five years in office,” Gadon wrote in the complaint.

Sereno’s camp, meanwhile, protested the scrutiny of her psychiatric test. They asserted that the House of Representatives has no business analyzing the result of her psychological assessment as it is not among the grounds for impeachment under the Constitution.

Lawyer Jojo Lacanilao, one of the spokespersons of Sereno, maintained that Gadon’s complaint was “bogus” for including the top magistrate’s psychological report as among his grounds to remove Sereno from her post.

“Congress’ concerns about removal from office should focus on the specific grounds stated in the Constitution, and the psychological report is not one of them,” Lacanilao said.

“Expanding and redefining the grounds for impeachment is itself a violation of the constitutional provision,” he also pointed out.                 /kga