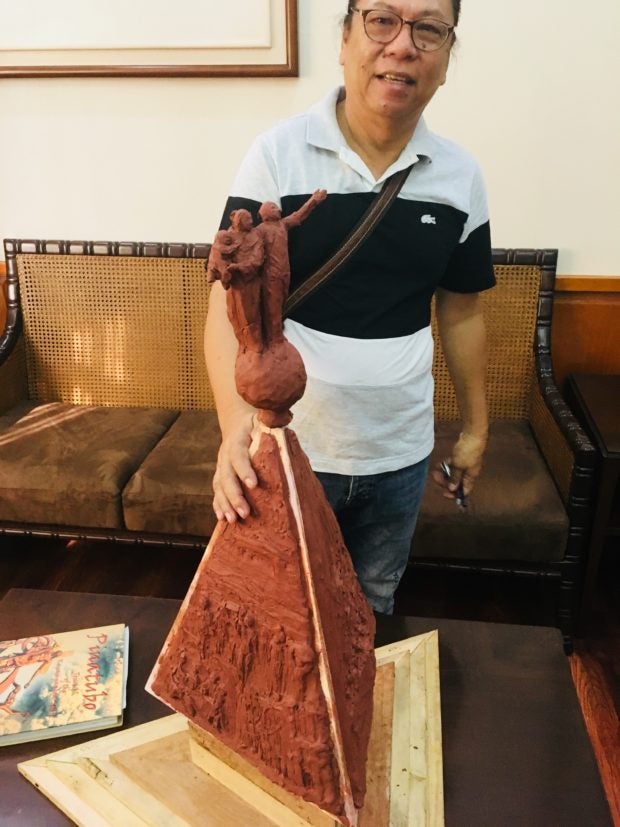 Wilfredo Layug, a papal awardee for religious arts, presents a miniature of Mt. Pinatubo monument that Pampanga leaders have scheduled to complete on the 26th year of the eruption this 2018. PHOTO BY TONETTE OREJAS

CITY OF SAN FERNANDO – Business and government leaders gathered here on Tuesday for the unveiling of a clay miniature study of what would be a 38-foot monument commemorating the Mt. Pinatubo eruption in June 1991.

The monument will honor the triumph of Kapampangans who rose above the second worst eruption in the 20th century.

Designed by artist Wilfredo Layug, the clay study features a pyramid that bear images of destruction that began with a 7.7-magnitude earthquake in northern Luzon on July 16,1990, steam explosions in April 1991, the eruption on June 15, 1991 which was capped by yearly flows of lahar (volcanic materials washed down by rains) until 1997.

The debris was equivalent to 300 million dump truck loads, according to the United States Geological Survey.

The monument, which will be made of bronze, will be topped by a family standing on a circular pedestal. “This is a very important monument because it will tell the next generations how we overcame the Pinatubo crisis. It shall remind us that the miracle of Pinatubo is really about working hand-in-hand,” said Pampanga Gov. Lilia Pineda.

Levy Laus, chair emeritus of the Pampanga Chamber of Commerce and Industry, said the monument should be able to capture the residents’ struggles and triumphs over adversities.

Board Member Rosve Henson said the provincial board would need to authorize the governor to negotiate with the North Luzon Expressway Corp. for the use of an 800-square meter lot to host the planned monument.

The project needs P50 million which will be raised by the provincial government and the private sector, according to Pineda.

“The price tag is of no importance,” Henson said, compared with the miseries that enveloped Pampanga, Tarlac and Zambales, the provinces straddled by the volcano.

The project was suggested during the 25th anniversary of the eruption.

Layug said he and his team of 20 artists will try to finish the monument by December or on the first quarter of 2019.

In 1991, around five million people lived under the shadow of Mt. Pinatubo. The National Economic and Development Authority (Neda), in a report published in the book “Fire and Mud,” placed the damage to crops, infrastructure, and personal property at P10.1 billion in 1991 and further losses of P1.9 billion in 1992.

“The actual destruction, coupled with the continuing threat of lahar and ash fall, has disrupted the otherwise flourishing economy of Central Luzon, slowing the region’s growth momentum and altering key development activities and priorities. Major resources have been diverted to relief, recovery, and prevention of further damage,” Neda said.

Before the eruption worsened, the United States closed the Clark Air Base in Pampanga and the Subic Naval Base in Zambales in the first week of June or months before the Senate rejected the extension of the 1947 military bases agreement.

The US government said the costs of caring for evacuees plus the construction of evacuation camps and relocation centers reached P2.5 billion in 1991 and 1992.

“The impact of the calamity is so great that the public and private response must go beyond traditional relief and recovery. Return to pre-eruption conditions is impossible,” NEDA said.

“Instead, responses must create an attractive climate for new investments, provide new livelihood and employment alternatives, promote growth in areas that are safe from future lahar and flooding, and provide an infrastructure that is tough enough to survive future natural disasters,” Neda said.