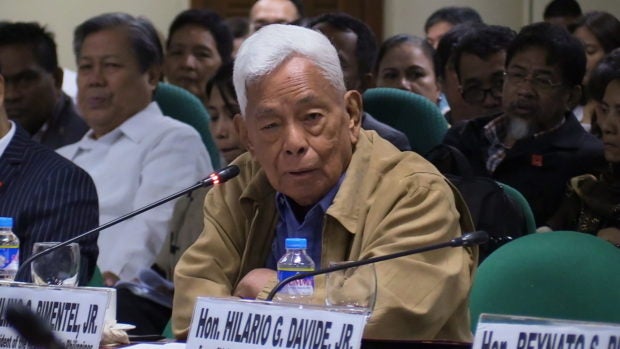 During Tuesday’s en banc session of the Consultative Committee (Con-Com) tasked by President Duterte to review the 1987 Constitution, Pimentel presented his proposal to adopt a presidential form of government in a federal system.

Apart from the current setup of national government, the country would have individual federal states with their own federal legislature and local governments.

A president and vice president would be elected nationally under Pimentel’s proposal.

On top of the existing qualifications, Pimentel said the president and vice president should at least be “baccalaureate degree holders from colleges recognized by the government.”

In the current Constitution, the president and vice presidents’ qualifications include: “a natural-born citizen of the Philippines, a registered voter, able to read and write, at least forty years of age on the day of the election, and a resident of the Philippines for at least ten years immediately preceding such election.”

The federal Congress, he added, would still have two Houses—the Senate and the House of Representatives.

But Pimentel pointed out that every State should be represented by six elected senators, and another six from Metro Manila and nine overseas senators or a total of 87 elected senators

The former lawmaker also proposed the creation of 12 federal states, five of which are in Luzon, four in the Visayas and three in Mindanao.

Metro Manila would be converted to a Federal Administrative Region, like United States’ Washington DC, and India’s New Delhi.

Meanwhile, Visayas’ federal states would be composed of the Federal State of Eastern Visayas, Central Visayas, Western Visayas and “Minparom” or provinces of Mindoro Oriental, Mindoro Occidental, Palawan and the Kalayaan Islands, Romblon, and Marinduque.

The Federal States of Northern Mindanao, Southern Mindanao and the Bangramoro would compose Mindanao’s federal states.

Each Federal State would elect its governor, and vice governor. Federal state legislature would be composed of representatives from provinces, highly urbanized cities, and sectoral groups.

Provinces, cities, municipalities and barangays would have the same structure.

The Supreme Court, Pimentel said, would be retained, including its powers, other than over constitutional issues.

The revenue shares of the Federal States and the LGUs (local government units) would increase.

In allocating resources, all revenues, not only taxes collected by the Bureau of Internal Revenue (BIR) would be the basis.

Pimentel proposed that 80 percent of the overall revenues be allocated to the states, and 20 percent to the federal government.

Of the 80 percent for states, meanwhile, 70 percent would be allocated to provinces, cities, municipalities and barangays, and 30 percent to the state government.

The executive Con-Com is set to vote Tuesday on the form of federal government to be included in the proposed Charter.

The 19-member body is expected to present after six months its proposals to Duterte, who will then submit it to Congress.

Congress may either affirm or dismiss the recommendations.