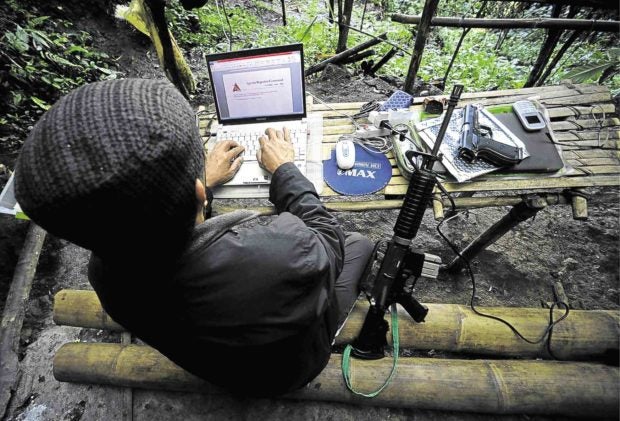 An NPA leader keeps in contact with the outside world through his laptop in an undisclosed Cordillera camp in this photo taken in 2013. —EV ESPIRITU/FILE PHOTO

The troops were on their way to a Philippine Army detachment on the boundary of Baras and Tanay towns for a case conference.

The police mobile, with PMFC head Supt. Melchor Agusin onboard, was driving along Barangay Pinugay in Baras, when an improvised explosive device blasted.

The police were able to drive about 300 meters more from the blast site when they realized that the driver, Police Officer 2 (PO2) Manuel Fang-asan, and passenger PO2 Jimmy Talupa were injured.

In a phone interview Thursday, Senior Insp. Cherylyn Agtarap, Rizal police spokesperson, said the victims’ injuries were only minor and that the explosive itself was not too big, describing it as something similar to a pillbox.

“However, we feel this was some kind of a diversionary (tactic) to create an impression that Rizal is under attack or draw our attention away from other areas where bigger attacks may happen,” she said.

On Sunday, six members of the police Special Action Force were injured after NPA rebels ambushed their vehicle in Antipolo City.

Agtarap said it was “possible” that the rebels involved in Sunday’s ambush were also the ones behind the Baras explosion.