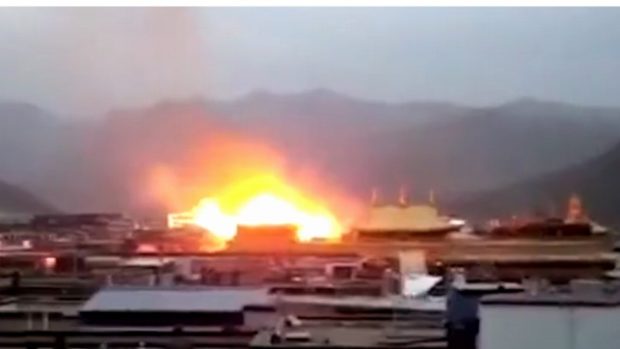 A weekend fire at the sprawling Jokhang monastery in Tibet did not affect the main chapel at the 1,300-year-old religious site, considered the spiritual heart of Tibetan Buddhism, the self-declared Tibetan government-in-exile said on Monday. (Associated Press photo)

BEIJING (AP) — Chinese authorities say they’ve ruled out arson as the cause of a fire that damaged a 1,300-year-old monastery that is one of Tibetan Buddhism’s most sacred sites.

The official Xinhua News Agency said Saturday’s fire at the Jokhang in the center of the Tibetan capital, Lhasa, burned an area of about 50 square meters (538 square feet).

The cause of the fire that broke out Saturday in a ventilating chamber was being investigated, though arson was ruled out.

Xinhua said in its report Wednesday that all 6,510 registered cultural relics remained intact, including a famed life-size statue of the Buddha when he was 12 years old.

Although the main structure was not damaged, workers had removed its golden cupola to guard against any collapse.

The temple reopened on Sunday.   /muf

Read Next
Jica: Traffic congestion now costs P3.5 billion a day
EDITORS' PICK
Biden vows to stand with Asia on freedom, hits at China on Taiwan
Climate Change Commission and Nestlé PH to discover sustainability-focused solutions
NCR’s COVID-9 alert level may be downgraded from 3 to 2 soon — DOH
FDA reviewing COVID-19 vaccines’ EUA for booster shots
Legarda emphasizes role of ICC/IPs in nation building this IP month
Work-From-Home is here to stay and requires reliable logistics
MOST READ
Drivers now required to take driver’s education upon license renewal – LTO
Gordon to Duterte: You? Teaching me courtesy?
Marcos Jr’s ‘special diploma’ from Oxford: You can have it, too
Can Marcos Jr. be disqualified?
Don't miss out on the latest news and information.