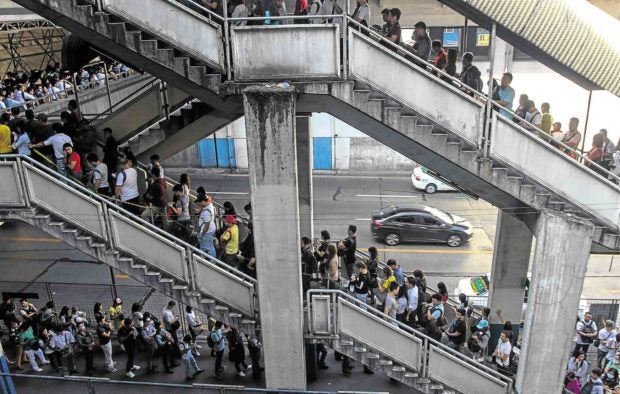 TRAVAILS OF COMMUTERS The glitches have not stopped thousands of commuters from joining long queues such as this that snakes all the way from the curb on Edsa up to the ticket booths on the third floor of the MRT 3 station on North Avenue, Quezon City, just to catch a train to work. —JAM STA. ROSA

More than a thousand riders of the Metro Rail Transit 3 (MRT 3) had an impromptu morning exercise on Tuesday. They were forced to walk from one station to the next on Edsa when their train conked out.

In recent days, the MRT 3 had become so unreliable that on Monday only some 207,000 riders were accommodated, a huge drop from last year’s daily average of 463,000 passengers.

When it took over as MRT’s interim maintenance provider, the Department of Transportation (DOTr) said there should ideally be 12 to 15 trains in operation. Because this has not been met over the last few weeks, the target has been lowered to just 10 to 12 trains.

Now, only seven trains on the average are running for 250,000 daily commuters.

The southbound train broke down on Tuesday between Ortigas and Shaw Boulevard stations at 6:32 a.m., just an hour after the MRT 3 started its revenue service for the day.

The problem was caused by an electrical failure in the train’s braking system due to worn-out electrical subcomponents, according to the MRT 3 management.

The incident forced the evacuation of the passengers to Ortigas and brought down to six the number of operational trains during the morning rush hour.

It came just a day after the country’s busiest train line was twice hit by a power supply failure.

Because of the low number of available trains, MRT 3 riders have to wait longer than usual, defeating the train line’s purpose of speedily transporting passengers.

On Tuesday, it took MRT 3 riders at least 39 minutes to reach the Guadalupe station in Makati from Taft Avenue in Pasay City, including the queue and waiting time at the platform.

Based on Google’s traffic data, the same trip by Uber or taxi would have taken commuters just 32 minutes despite the moderate traffic on Edsa around noon.

By the end of February, the number of trains will rise to 10 because of the arrival of new spare parts, transport officials said on Tuesday at the public hearing on MRT conducted by the Senate committee on public services.

The committee is chaired by Sen. Grace Poe.

“So long as no trains would go down, we will have spare parts arriving that would allow us to bring the number of trains back to 10 by end of February,” Transportation Undersecretary for Rails TJ Batan said.

Asked by Poe about the number of trains needed during peak hours, Batan said 20 trains should be running.

Batan said the DoTr was targeting to have 15 trains running in March after the three-and-a-half-day shutdown of the MRT during the Holy Week.

According to commuters rights group Train Riders Network (TREN), the DOTr has “been doing a bad job” since it took over the MRT 3’s maintenance in November.

“We believe that the maintenance of the MRT 3 is failing because the DOTr is not serious [in doing its job],” TREN convener Angelo Suarez told the Inquirer.

“They are just filling in an existing gap before it passes it on to a private concessionaire, which we shouldn’t do.”

Suarez said the country must build its own capacity “to maintain our own rails.”

Earlier, the DOTr said that more than 50 Japanese railway engineers and experts from the Japan International Cooperation Agency (Jica) were conducting a system audit of the MRT 3.

The audit, according to the DOTr, will help the Jica-nominated maintenance provider once it conducts the needed rehabilitation and restoration works on the train line in May.

Alongside this, an independent audit of the 48 Dalian trains bought by the Aquino administration is being done by a German company, TUV Rheinland. On Monday, the company had one train set to run for three full loops on the line.

According to the MRT 3 management, the P3.8-billion Chinese-made trains may be put in service once the audit shows that these can be rolled out for public use.

At the Senate hearing, Batan said that since November, the DOTr had put up a special bids and awards committee to fast-track the procurement of spare parts for the MRT trains.

He said that as of December, the department had completed the procurement of the first batch of spare parts, which could be delivered from 30 days to six months.

But Batan said the spare parts started arriving this month.

He said that among the spare parts the DOTr was purchasing were for the signaling system of the trains.

Batan told Poe that the Canadian company Bombadier had requested that it bring the spare parts for the signaling system in seven weeks but the DOTr had asked the company to deliver “when available.”

Poe told reporters that she wanted to make public the DOTr promise of more running trains so that if the department would not deliver, people could point this out.