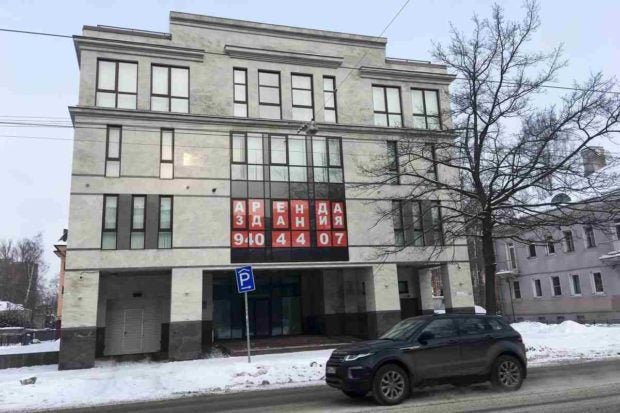 A views of the four-story building known as the “troll factory” in St. Petersburg, Russia on Saturday, February 17, 2018. The United States government allege the Internet Research Agency started interfering as early as 2014 in US politics, extending to the 2016 presidential election, saying the agency was funded by a St. Petersburg businessman Yevgeny Prigozhin. (AP Photo/Naira Davlashyan)

ST. PETERSBURG, Russia — While Russian officials scoff at a United States indictment of 13 Russians in connection with their purported interference in America’s 2016 presidential election, several people who worked at the same St. Petersburg “troll factory” thought that the criminal charges are well-founded.

His own experience at the agency makes him trust the US indictment, Mindiyarov told The Associated Press.

“I believe that that’s how it was and that it was them,” he said.

The federal indictment issued Friday named 13 people – a businessman linked to President Vladimir Putin and a dozen other Russians – for meddling in the 2016 US presidential election.

It alleges that Yevgeny Prigozhin – a wealthy restaurateur dubbed “Putin’s chef” – paid for the internet operation that created fictitious social media accounts and used them to spread dubious messages.

The aim of the factory’s work was either to influence voters or to undermine their faith in the US political system, the 37-page indictment stated.

Putin spokesman Dmitry Peskov told reporters on Monday that while the indictment focuses on “Russian nationals,” it gives “no indication that the Russian government was involved in this in any way.” Peskov reasserted that Moscow did not interfere in the US election.

Mindiyarov said that he failed the language exam needed to get a job on the IRA’s Facebook desk, where the pay was double than the domestic side of the factory. He also said that the sleek operation produced content that looked as if it were written by native English speakers.

“These were people with excellent language skills, interpreters, university graduates,” he said. “It’s very hard to tell it’s a foreigner writing because they master the language wonderfully.”

The English test he took asked for a writing sample about Democratic candidate Hillary Clinton’s chances of winning the US presidential vote, Mindiyarov recalled.

“I wrote that her chances were high and she could become the first female president,” he told the AP.

Mindiyarov said he took a job at the troll factory in late 2014 because he was unemployed and curious. At the time, he said, about 400 people occupied four floors of an office building, and worked 12-hour shifts.

According to Mindiyarov, most of the operation focused on the separatist insurgency in eastern Ukraine and Western sanctions against Russia, not political races in the West.

He also said that the factory had video and photo departments, and trolls received their wages in cash and operated in teams as they tried to foment public interest with fake discussions.

“We worked in a group of three where one played the part of a scoundrel, the other one was a hero, and the third one kept a neutral position,” he said.

“For instance, one could write that Putin was bad, the other one would say it was not so, and the third would confirm the position of the second while inserting some picture,” he also narrated.

After only a couple of months, Mindiyarov quit. He said he hated the work.

“The world in those comments was divided into black and white: America was bad, Putin was good,” he said. “They praised whatever had to do with Putin and criticized anything related to America, ‘gay’ Europe, and so on. That was the principle of the work.”

Another former worker at the St. Petersburg workshop, Lyudmila Savchuk, also described it as an efficient venture that churned out posts around the clock.

Like Mindiyarov, Savchuk was employed in the domestic department of the “troll farm,” not the international division. Nevertheless, she said her experience there corresponds with what she knows of the allegations made by American authorities.

“The posts and comments are made to form the opinion of Russian citizens regarding certain issues, and as we see it works for other countries, too,” Savchuk told the AP.

Paid trolls used carefully crafted fake identities that made them come across like real people, she said.

“The most important principle of the work is to have an account like a real person,” Savchuk said. “They create real characters, choosing a gender, a name, a place of living and an occupation. Therefore, it’s hard to tell that the account was made for the propaganda.”

Prigozhin, a.k.a. “Putin’s Chef,” owned restaurants and catering businesses that hosted the Russian leader’s dinners with foreign dignitaries. He used his relationship with Putin to expand his business to include services for the Russian military.

“I’m not at all upset that I’m on this list,” Prigozhin said of the indictment in comments carried by Russia’s state RIA Novosti news agency. “If they want to see the devil, let them see him.”

The IRA also paid people in the US to promote or ridicule the candidates, the document stated.

Analysts and journalists have found that some of the Russian-run accounts accumulated national followings in the US while far-right Americans and several members of Trump’s team re-tweeted posts created in St. Petersburg.

The IRA reportedly used doctored videos to spread false reports about a supposed Islamic State attack on a chemical plant in Louisiana, and a purported case of Ebola in the state of Georgia.

Seeking to sow division and mistrust ahead of the US election, the IRA also allegedly whipped up a fake video of an African-American woman being shot dead by a white police officer in Atlanta.

“All of the trolls knew that it’s Prigozhin who stands behind this all,” Mindiyarov, the ex-commenter who left the organization in early 2015, said. “But nobody had any evidence.”

He said that the employees disliked Prigozhin, in part because he did not set up a cafeteria or canteen in the troll factory building even though he owned a sprawling catering business.

“People had to bring food boxes from home,” Mindiyarov said. “Prigozhin did not treat the trolls well. He could at least feed them.”

While the US indictment mentioned 13 people, many more must have been involved in the effort, according to Savchuk.

“Here they laugh about the news that 13 people could influence the elections in the US but there were many more people doing that,” she said. “These technologies are unbelievably effective.”

She added that she learned how effective the troll farm’s work was when she saw regular people sharing opinions and information that she knew were planted by trolls.

“They believed it was their own thoughts, but I saw that those thoughts were formed by the propagandists,” she said.

The IRA has reportedly changed locations, moving to another business center in the northern part of St. Petersburg. It was unclear whether it still goes by that name.

Andrey Zakharov, an investigative journalist with Russian RBC outlet who co-reported an investigation of the troll factory, said the list of indicted Russians looked “quite random” to him.

“They simply included in it all the names they could find,” Zakharov told the AP. “According to our information, some of these people don’t work at the factory now and did not even work there during the (US) elections. This does not look like a result of a solid investigation.”

Although the US indictment is detailed, it makes assertions without providing evidence outright. Russian officials have seized on that, including Foreign Minister Sergey Lavrov, who dismissed the charges as “just blabber.”                       /kga