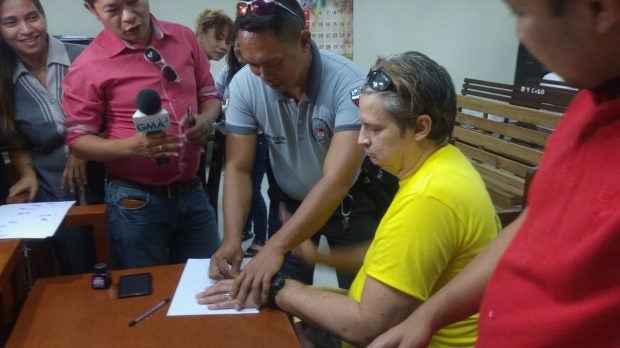 A jail officer helps Drew Frederick Shobbrook put his finger marks on a court document after the verdict against him was read. CDN /ADOR MAYOL

CEBU CITY–An Australian national and his female companion were convicted by a Cebu City court on Tuesday for operating a cybersex den and exploiting minors in Barangay Labangon, Cebu City in 2013.

Drew Frederick Shobbrook was found guilty by the Cebu City Regional Trial Court Branch 20 of two counts of qualified trafficking and one count of child pornography.

His co-accused, Leslie Ann Crasco, a Filipina, was meanwhile sentenced to serve one life term after she was found guilty of qualified trafficking.

Shobbrook and Crasco were arrested by agents of the National Bureau of Investigation who raided his apartment on April 17, 2013 and rescued 15 women – four them minors.

The NBI agents were assisted during the raid by members of the International Justice Mission, an anti-human trafficking non-government organization and the Inter Agency Council Against Trafficking.

Three of the rescued victims told authorities that they were paid to perform sex acts in front of web cameras.  /muf