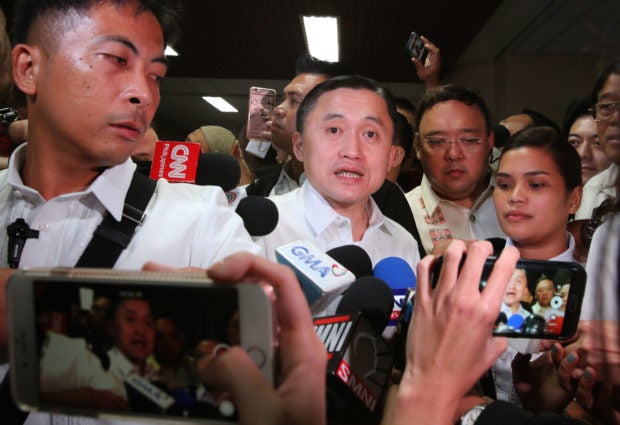 IN THE NEWS President Duterte’s special assistant, Christopher “Bong’’ Go, is mobbed by reporters after emerging from Monday’s Senate hearing, where he denied meddling in the selection of a combat management system for two frigates being acquired by the Navy. —JOAN BONDOC

President Rodrigo Duterte’s longtime special assistant, Christopher “Bong” Go, on Monday told senators that he did not interfere in the process for the procurement of two warships for the Philippine Navy.

Go was testifying at the opening hearing called by the Senate committee on national defense and security in an inquiry into a controversy involving the choice of a weapons system provider for two frigates being acquired by the Navy from Hyundai Heavy Industries Co. Ltd. (HHI) of South Korea as part of its modernization program.

The inquiry was prompted by media reports that carried a leaked document with an annotation that linked Go to the process of procuring a combat management system (CMS) for the frigates.

The panel headed by Sen. Gregorio Honasan II was looking to determine whether Go had interfered in the procurement process.

Go denied any wrongdoing and read a statement critical of the media, calling the reports “fake news.”

Asked by Sen. Grace Poe if he knew who may have used his name, giving rise to the controversy, Go replied that he could not point to anyone but reminded the senators about President Duterte’s instruction that any requests name-dropping him or his family or him (Go) should be considered denied.

In his explanation of the document, Go said he was simply passing to the Department of National Defense (DND) a “complaint” the Office of the President had received.

The Inquirer and the news website Rappler last month carried reports about a leaked paper originating from the President’s office and asking the Navy to look at a proposal by the South Korean subcontractor Hanwha Systems Co. to supply the CMS.

Defense Secretary Delfin Lorenzana confirmed that the document was given to him in Malacañang and said he added an annotation to it telling Vice Adm. Ronald Joseph Mercado, the then Navy chief, to rebut it.

But Lorenzana told the hearing on Monday that he could not be certain who handed the document to him.

Earlier, he said he had erroneously assumed that the document came from Go.

Mercado also said earlier that Go did not intervene in the frigate procurement process.

Mercado was sacked as Navy chief last December over a dispute about the choice of CMS provider for the frigates.

Lorenzana said at Monday’s hearing that he sought the relief of Mercado because the then Navy chief usurped his authority and told a senior officials’ meeting that if the government would not choose the Tacticos CMS of Thales Nederland, he would work for the cancellation of the contract.

Mercado preferred the Tacticos CMS because it was compatible with other weapons systems in the military.

At the hearing, Go described the document given to Lorenzana as a complaint from Hanwha, but he did not specify what the complaint was about.

“We are being castigated for endorsing a complaint [to] the proper agency. A mere notary endorsement, which is one of the thousands of complaints we endorse,” he said, adding that it was Mr. Duterte’s agenda to be open to receive complaints about state officials.

Go said the frigate controversy was “seriously derailing” the implementation of an important security program.

He challenged the Inquirer and Rappler to say in their headlines on Tuesday that he was “innocent.”

Go requested the committee to call the two media outlets to the next hearing to explain their reports.

Even before the hearing was over, Malacañang said it was clear from testimonies in the proceedings that Go did not interfere in the Navy project.

Presidential spokesperson Harry Roque said that even Mercado himself cleared Go of meddling in the project.

Roque said the Palace could not have intervened in the project because Hanwha had already been chosen as CMS provider for the frigates.

“It has always been Hanwha. Although there was always a continuing preference for Tacticos, but at which time, it was impossible to supply it without a price increase,” he said.

At the Senate hearing, Mercado warned that the Navy would get frigates that would prove to be a “nightmare” to maintain because the government lost its right to choose the CMS provider.

He said HHI inserted a provision in the contract that gave it the right to choose the CMS provider, to the gross disadvantage of the government.

Under questioning by Sen. Risa Hontiveros, who expressed worry about the involvement of different suppliers, Rear Adm. Robert Empedrad, the new Navy chief, said HHI would deliver the frigates in 2020 with the CMS already integrated.

He noted that the Navy had no capability to integrate the CMS into the vessels.

Mercado acknowledged that Hanwha, and also Thales, could integrate the weapons system, “[b]ut because we lost the right to choose and as you’ve mentioned by having different makers, we will have a ship in the future that will be very expensive to operate and maintain.”

He said “one of the concepts of modernization is commonality,” pointing out that the Philippine Army and the Philippine Marines were equipped with the same arms.

“And because these warships, because we lost the right to choose [subsystems there] and that this would come from different makers, it is a nightmare for trying to maintain it,” he said.

Senate President Pro Tempore Ralph Recto pushed for the DND to reconsider and take Thales as CMS provider for the frigates.

He said research by his office showed most countries used Thales as CMS provider for their warships.

But Lorenzana said choosing Tacticos would cost an additional $7 million per frigate.

Like Empedrad, Lorenzana said Hanwha had passed the technical requirement.

Recto, however, said the DND was getting an average budget of P35 billion every year from Congress.

He recommended Tacticos for the frigates, noting that “no one here can say that Hanwha was superior as a CMS provider.”

Recto also noted that Hanwha’s CMS was used only in South Korea and Malaysia.

Sen. Antonio Trillanes IV told reporters that he was also pushing for the Navy to get Tacticos even if it would need a reallocation of funds. —WITH REPORTS FROM LEILA B. SALAVERRIA