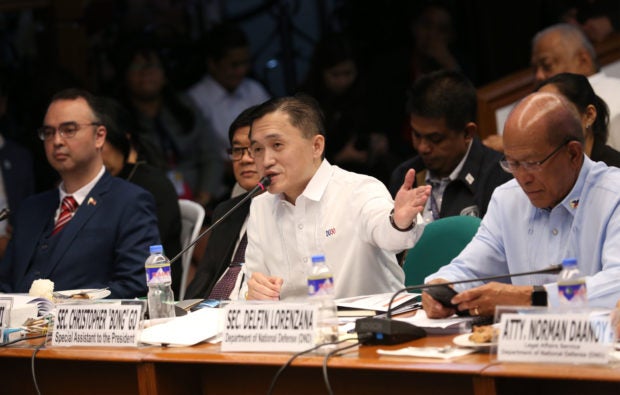 ‘I AM INNOCENT’ Backed by a retinue of Cabinet officials, Special Assistant to the President Christopher “Bong’’Go accuses critics of dragging him into the frigate acquisition controversy “to destroy the administration of President Duterte.’’ —JOAN BONDOC

President Rodrigo Duterte on Monday night stood by Cabinet officials who appeared in the Senate to defend the Navy’s frigate acquisition project, cautioning lawmakers against demeaning them.

Mr. Duterte said he had advised his close aide, Christopher “Bong” Go, to just tell the truth, and that he believed in Defense Secretary Delfin Lorenzana, saying he was among the men of honesty and integrity in his administration.

Hours earlier, Go faced the senators at their inquiry into the Navy’s acquisition of frigates and the selection of the combat management system (CMS).

The President asked Congress to treat military officials and Cabinet officials with respect.

“Do not demean them before the public,” he said in a speech at the 10th biennial convention and 20th founding anniversary of Chinese Filipino Business Club Inc.

He issued the warning as he lamented that lawmakers treated resource persons in the past as if they were guilty, and recalled the fate of former Defense Secretary Angelo Reyes.

In 2011, Reyes was grilled by senators over allegations that he received hefty payoffs from a military slush fund when he was the Armed Forces chief.

He later refused to attend hearings and killed himself by shooting himself in the chest over his mother’s grave.

Mr. Duterte said his order to officials was to “stand up and go out” if they were being degraded and their dignity was being violated.

“If you are arrested, I will object. If they don’t release you, I will go to Congress, even alone, to get you. If I die in the process, let it be,” he said.

Earlier in the day, presidential spokesperson Harry Roque defended the presence of Malacañang and Cabinet officials at the Senate appearance of Go, who was questioned by the senators for his alleged role in the Philippine Navy’s frigate acquisition program.

Roque said the Palace officials went with Go to the Senate to show their solidarity with him, since they worked closely with him in Malacañang and because they themselves could face the same situation.

“It’s natural that if one of them is facing a challenge, you would show support,” he said in a press briefing.

The President’s photographers were also at the Senate to document Go’s appearance.

Go has been questioned for his alleged interest in the selection of the frigates’ CMS provider after a letter from one supplier was given to Lorenzana in Malacañang.

Lorenzana forwarded the letter to the Navy chief, with a note saying it came from Go.

Lorenzana later said he had wrongly assumed it came from Go, while Go denied having any interest in the project.