Woman runs after snatcher — then takes him out for coffee 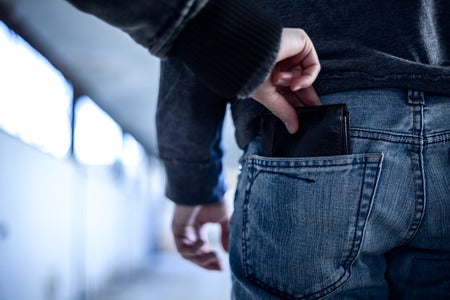 When a woman in Edmonton, Alberta heard another woman in an alley yell that her wallet had been taken, she chased after the snatcher without a second thought.

It was just after lunch when Tess Aboughoushe hunted down the man for two blocks and found him hiding behind a dumpster in an alley, reports CBC Radio’s Edmonton AM.

The long-distance runner found the thief with a hand in his pocket. While she expected him to draw a knife, the man in a too-large parka was suddenly in tears.

He returned the wallet and said, “I can’t do this anymore, I’m sorry, just take it, take it.” He continued to apologize when the victim arrived at the alley and received her wallet.

After she hugged the woman and greeted her a “Happy Valentine’s day,” Aboughoushe decided to treat the man to a large black coffee at a café a few blocks away.

He revealed that he was visiting from Calgary with friends. However, they had left him without a cent to his name, and being desperate for any way to get back home, he thought of stealing.

“He said, ‘I’ve never done anything like this before. I just really need the money. I don’t know where to go. I’m lost,’” she narrated on the radio show.

She directed him to a public library so that social workers could assist him. She also filed a police report, though she does not want him punished.

“I offered the guy a coffee because you could tell he was very distraught and upset,” she explained. “I wanted to show him some compassion.” Niña V. Guno/JB