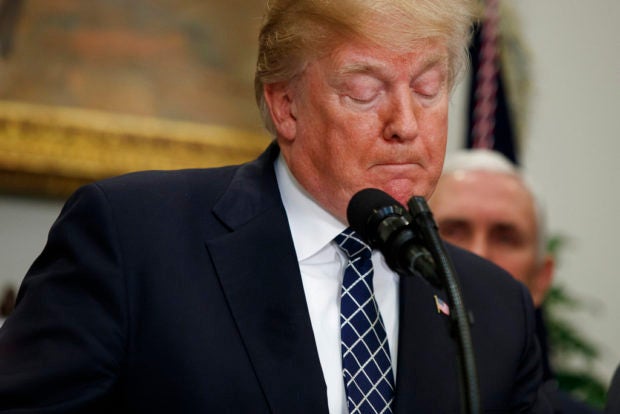 WEST PALM BEACH, United States — President Donald Trump said Sunday that Russia was succeeding beyond its “wildest dreams” in sowing US discord but refrained once more from directly challenging Moscow on its election meddling.

In a flurry of tweets, Trump blamed former president Barack Obama for failing to stop Russia while accusing the FBI of spending “too much time trying to prove collusion with the Trump campaign.”

But the president has made no move to take on Russia since indictments Friday against 13 Russians that laid out in detail aspects of an alleged covert effort to sway the 2016 US presidential election in Trump’s favor.

US intelligence chiefs warned earlier in the week that Russian meddling has continued and poses a threat to the US mid-term congressional elections this year.

But Trump glossed over Russian responsibility and offered no indication of what his administration would do about it.

“General McMaster forgot to say that the results of the 2016 election were not impacted or changed by the Russians and that the only Collusion was between Russia and Crooked H, the DNC and the Dems,” Trump said in a tweet late Saturday, making reference to his defeated Democratic Party challenger Hillary Clinton.

He followed that up Sunday: “I never said Russia did not meddle in the election, I said ‘it may be Russia, or China or another country or group, or it may be a 400 pound genius sitting in bed and playing with his computer.’ The Russian ‘hoax’ was that the Trump campaign colluded with Russia – it never did!”

Friday’s indictment was filed by Special Counsel Robert Mueller, who is investigating possible collusion between Trump’s campaign and Russia, and possible obstruction of justice.

“For anyone, including the president, who continues to call this a witch hunt… the evidence is now overwhelming and unequivocal and we need to move to protect ourselves from Russian interference in elections that are coming up,” said Adam Schiff, the senior Democrat on the House Intelligence Committee, speaking on CNN’s “State of the Union” program.

Trump, however, suggested that the problem lay with congressional and Department of Justice probes, rather than the interference itself.

“If it was the GOAL of Russia to create discord, disruption and chaos within the U.S. then, with all of the Committee Hearings, Investigations and Party hatred, they have succeeded beyond their wildest dreams,” Trump tweeted.

“They are laughing their asses off in Moscow. Get smart America!” he added.

In yet another tweet, he said: “Obama was President, knew of the threat, and did nothing.”

Schiff agreed that the Obama administration should have done more when it learned of the Russian meddling.

“None of that is an excuse for this president to sit on his hands,” Schiff said.

“The president of the United States continues to sit on sanctions that Congress passed, that Congress wants enforced against Russia over this interference,” he said.

The US Treasury Department last month issued a list of prominent Russian political and business figures who could be sanctioned, as required under a law passed last year to punish Moscow’s election meddling.

But the administration said new sanctions called for under the law were not needed because the measure was already having a deterrent effect.

The indictments brought by Mueller alleges that the Russian campaign was launched in 2014, initially as an effort to undermine confidence in the US political system.

By mid-2016, however, the campaign — under the direction of Yevgeny Prigozhin, a close ally of Russian President Vladimir Putin — had become focused on hurting Clinton and helping Trump, according to the indictment.

The effort allegedly involved hundreds of people working in shifts and with a budget of millions of dollars. Three companies were also indicted.

The indictment did not address the Russian government’s role or hacks of the Clinton campaign and Democratic National Committee.

“I do think there are other shoes to drop here besides this indictment,” former national security director James Clapper said on CNN.

In announcing the indictments, Deputy Attorney General Rod Rosenstein said there was “no allegations in this indictment” that any American was a “knowing participant” in the Russian scheme — leading Trump to declare that this vindicated his campaign team.

Rosenstein also said there was no judgment on whether the Russian campaign “altered the outcome” of the White House race.