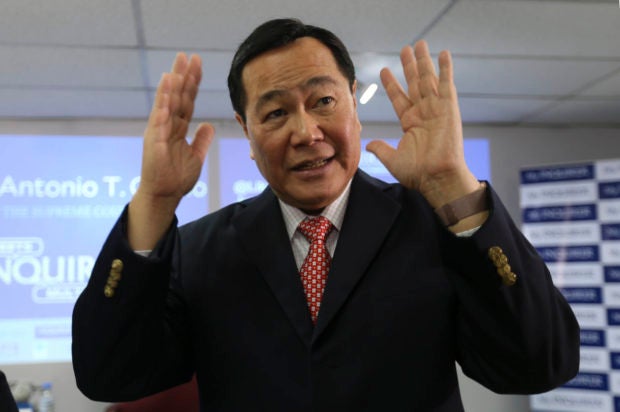 The Philippines should be more circumspect about China’s word that it would not construct anything on uninhabited features in the South China Sea, Supreme Court Senior Associate Justice Antonio Carpio said on Sunday.

“The Duterte administration still believes in China’s good faith, but any level-headed observer certainly will not,” Carpio said in an e-mail to the Inquirer.

“China has repeatedly stated that it can build anything on its national territory,” he said. “[It] continues to claim as its national territory 80 percent of the Philippine EEZ (exclusive economic zone) … even if the seas beyond [22 kilometers] from a country’s coastline do not constitute territory under international law.”

Carpio’s remarks came two days after Foreign Secretary Alan Peter Cayetano disclosed that Beijing had given Manila its assurance that it would not conduct any activities on uninhabited sea features in the South China Sea.

“There’s a commitment [made] by China and all other parties not to build on uninhabited sea features in accordance with the Declaration of Conduct [of Parties] in the South China Sea,” Cayetano said in a press conference on Friday.

“We’re putting on record what has to be put on record,” he said. “Just because we’re not announcing diplomatic actions [on the South China Sea dispute] doesn’t mean we’re not taking it.”

Cayetano was referring to criticism of the Duterte administration’s acquiescence to China’s building air and naval bases on seven reefs claimed by the Philippines in the Spratly archipelago.

Carpio has compared Malacañang’s faith in China’s word to “trusting a thief.”

But why should the government be circumspect about China’s word?

For one, Carpio pointed out that Beijing had actually reneged on its earlier commitment to do what it had told Cayetano when it started building artificial islands in the Spratly archipelago in 2014.

Carpio, a member of the Philippine legal team that secured a landmark ruling from an international arbitral court that invalidated China’s sweeping claims in the South China Sea, said Beijing’s pledge was contained in the Declaration of Conduct of Parties in the South China Sea that it signed with the Association of Southeast Asian Nations (Asean) in 2002.

Besides the Philippines, three other Asean members—Brunei, Malaysia and Vietnam—have claims in the South China Sea, which is crisscrossed by sea-lanes where $5 trillion in global trade passes every year and where islands, reefs and atolls are believed to be sitting atop vast oil and gas deposits.

“The Asean-China [declaration of conduct] … expressly states that the parties shall refrain from ‘inhabiting on the presently uninhabited islands, reefs, shoals, cays and other features.’ [But] from 2014 to 2016, China undertook a massive island-building spree in the Spratlys despite the [declaration],” Carpio said.

Moreover, Chinese President Xi Jinping in 2016 openly assured then US President Barack Obama that Beijing “would not militarize its reclaimed islands in the Spratlys.”

Just two years later, Carpio said even the Philippine government formally acknowledged that China had failed to keep its promise to Obama when it built military facilities on reefs in the Spratlys claimed by the Philippines.

Said Carpio: “Today, China is promising … Cayetano that China will not build anything on uninhabited features in the South China Sea even as China refuses to comply with the arbitral ruling.”

Carpio, who has made the Philippines’ fight for sovereignty in its territory in the South China Sea his personal advocacy, also insisted that Manila enjoyed the “preferential right to name undersea features” in the Philippine Rise as mandated by the International Hydrographic Organization and the Intergovernmental Oceanographic Commission.