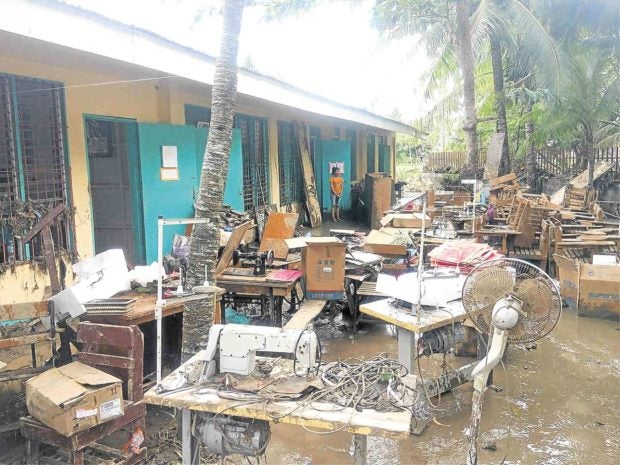 Desks, computers, sewing machines and books were brought outside the Guinsularan High School building in Guindulman, Bohol, after these were caked in mud at the height of flooding brought by Tropical Depression “Basyang.” —LEO UDTOHAN

GUINDULMAN, BOHOL— Teacher Lourdes Jordan was already expecting to see devastation when she went to Guinsularan High School on Wednesday to check the school building in the aftermath of Tropical Depression “Basyang.”

The scene that unfolded before her eyes still shocked her —desks coated in mud, sewing machines soaked in water, computers dripping wet and textbooks soggy after these were submerged in floodwater.

“Nothing was left. It destroyed our teaching materials,” she said.

Newly delivered textbooks for high school students, new sewing machine and computers could no longer be used as a mix of mud and water swamped the school at the height of Basyang.

The painful sight, however, didn’t dampen the determination of parents and volunteers to keep the school functioning. They helped teachers and school staffers to clean up and do repair work.

Jordan said classes had to be suspended until the task of cleaning up had been completed.

Basyang dumped a heavy volume of rain in Bohol on Tuesday, unleashing floods that put the school underwater.

A portion of the school’s concrete fence collapsed because of rampaging floods, which residents described as the worst to hit the town.

The disaster that befell the school attracted a host of politicians who came to visit. One, a congressman, had his picture taken with the destruction in the background and appearing to be sad.

A member of the provincial board, Victor Balite, checked on the school on Wednesday and promised to ask the board to donate computers. “Once computers get wet, they have to be replaced,” he said.

Flooding made roads in the town impassable to all types of vehicles and destroyed the town’s link to the rest of the province, Guinacot Bridge.

Three residents had to be rescued from the roofs of their houses, where the flood forced them to seek safety.

A town next to Guindulman, Duero, was also hit by the flooding. Mary Ann Berto, 38, of the village of Guinsularan in Duero, said she and her family stayed in a relative’s house following heavy rains on Tuesday night.

When she returned the next day, she no longer had a house to stay in as it was swept away by the floods.

Her eldest son Edmar Jun, 15, and Grade 9 student at Guinsularan High School, lost his school supplies. But like many other students, he went to school to help with the cleanup.