‘If you don’t like TRAIN, then don’t pay’ but…, Duterte tells critics 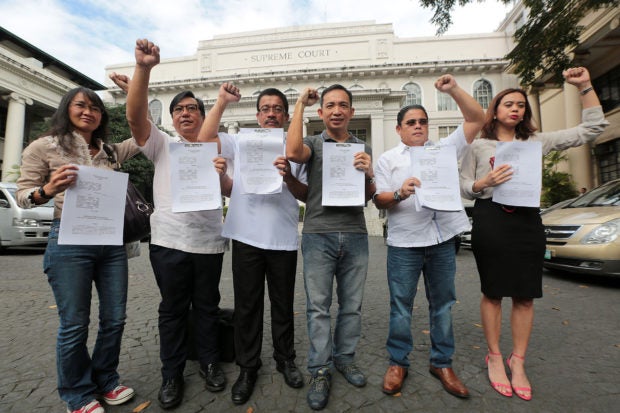 Representatives Carlos Zarate (third, from left), Antonio Tinio and Ariel Casilao question the House ratification of the TRAIN law on the night of Dec. 13, 2017, claiming there was no quorum during the voting. —GRIG C.MONTEGRANDE

President Duterte has dared critics of his administration’s tax reform law to stop paying taxes if they object to it so much.

But they should also face the consequences of their actions, Mr. Duterte said.

During a private meeting early on Tuesday, Mr. Duterte noted that there continued to be protests against the Tax Reform for Acceleration and Inclusion law.

“If you don’t like TRAIN, then don’t pay. It’s simple. You’re against the taxes? Do not pay,” he said.

But these people should not expect him to help if the Bureau of Internal Revenue goes after them, he said.

“Do not blame me if the BIR also will go after you. As simple as that,” he said.

The administration’s economic managers have pushed for the passage of the TRAIN law, saying that the revenue to be generated from it would fund the government’s ambitious infrastructure program.

This, in turn, is expected to generate jobs and spur economic growth.