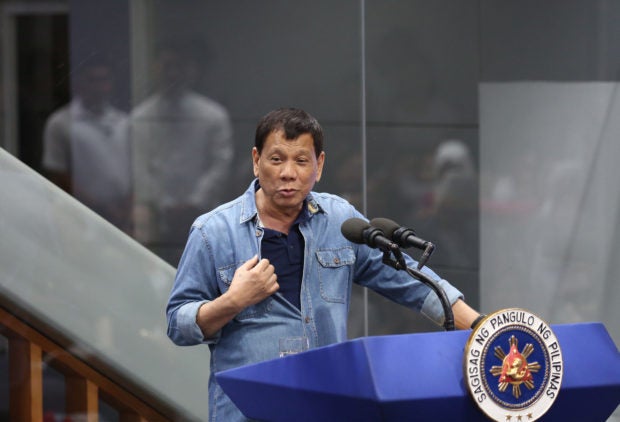 The Office of the Ombudsman finally confirmed that the probe on President Duterte for plunder had already been closed and terminated, two days after Solicitor General Jose Calida made the revelation.

“The Office of the Ombudsman confirms that the fact-finding or field investigation on the complaints filed against the President was closed and terminated on 29 November 2017 after the Anti-Money Laundering Council declined to provide a report or confirmation on the requested vital data,” the office said in a press release on Thursday.

“By rule, ‘[a] closed and terminated field investigation is without prejudice to the refiling of a complaint with new or additional evidence,’” it added.

It said Ombudsman Conchita Carpio-Morales only knew about the termination last January 29 when overall Deputy Ombudsman Melchor Carandang was suspended over the release of Duterte’s bank records.

Calida, in a press conference on Tuesday, slammed Morales for failing to publicly disclose the termination of the investigation involving the President.

Last February 12, Carandang formally informed Calida in a letter that the recommendation to terminate the investigation was approved by Deputy Ombudsman Cyril E. Ramos as early as November 29, 2017.

But the Ombudsman’s statement said Calida had “raised certain questions which may be answered by his own declarations.”

“He asked why the Ombudsman kept quiet about the matter. Oddly, he himself pointed out that the Ombudsman had inhibited herself from the investigation,” it said.

“The Solicitor General might want to consider whether it is proper for an official who inhibited from an investigation to remain involved therein. The Ombudsman posits that it is not. In keeping therewith, the investigation was given free rein and proceeded without her intervention,” it added.

The office also stressed that it was not obliged to inform the subject of any fact-finding investigation about its outcome.

“The confidentiality of proceedings was, in fact, recognized by the Solicitor General when he cited the exception that the Ombudsman has the power to publicize certain matters (e.g., whether or not to act upon an inquiry ‘out of curiosity’ or media requests for case status out of journalistic duty). The Ombudsman could not have considered exercising such discretionary power relative to the complaints against the President due to her inhibition,” it added.

Meanwhile, the Ombudsman also noted Calida’s recognition of Carandang as still the overall Deputy Ombudsman despite Malacañang’s “unconstitutional” order to preventively suspend him.

“The Office observes that the Solicitor General effectively recognized Carandang as the Overall Deputy Ombudsman through his official letter-inquiry dated 8 February 2018 addressed to ODO Carandang who, at such date, had been ‘supposedly’ under preventive suspension. The Office sees this as a recognition of the unconstitutionality of the preventive suspension order,” it said. /je