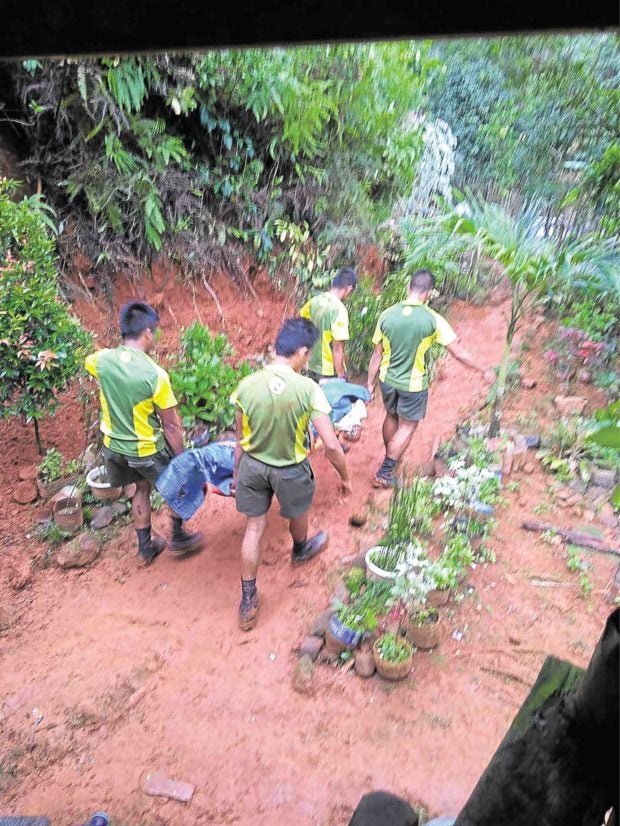 Soldiers from the Army’s 36th Infantry Battalion retrieve the body of a farmer who died in a landslide that hit the village of Babuyan in Carrascal town, Surigao del Sur. —PHOTO COURTESY OF 36th IB VALOR BATTALION

SAN FRANCISCO, Agusan del Sur — The death toll from landslides and floods triggered by heavy rain dumped by Tropical Depression “Basyang” (international name: Sanba) and other storm-related incidents had climbed to 14 in Mindanao and the Visayas on Wednesday, reports from disaster response agencies and local governments showed.

In Surigao del Norte province, Rosalyn Gabeligno, 11, drowned in the Anislagan River in Placer town on Tuesday, while Jaime Conjurado, 70, died in a landslide that hit his house in Barangay Magsaysay, also in Placer.

Reports from the provincial disaster risk reduction and management office (PDRRMO) said Jerson Damalerio, 35, drowned at the Magtiaco River in Alegria town while the body of another drowning victim, Reynaldo Cadayao, 35, a resident of Tubay town, was found also in Alegria. Julito Alburo drowned in Barangay Masgad in Malimono town.

In Surigao del Sur, five people were killed by landslides that hit the villages of Gamuton and Babuyan in Carrascal town, before Basyang made landfall in Cortes town, according to the Office of the Civil Defense (OCD) in Caraga region.

At 3 p.m. Wednesday, the LPA, which was moving westward over the Sulu Sea, was estimated to be 195 kilometers south of Puerto Princesa City in Palawan.

The weather bureau forecast cloudy skies with scattered to widespread rainshowers and thunderstorms in Palawan due to the LPA and warned of possible flooding and landslides.

Liza Mazo, OCD Caraga director, said the agency had yet to determine the number of people displaced by floods and landslides although reports from different government agencies in the region showed that more than 17,000 people were affected as of Wednesday.

Abel de Guzman, Surigao del Sur disaster response officer, said debris and trees uprooted in the upper part of the mountain had triggered the landslides in Gamuton and Babuyan. Debris also blocked access to the roads leading to these villages.

In a statement posted on its Facebook page on Wednesday, the Surigao del Sur PDRRMO said while Basyang was classified as a moderate storm, the volume of rainfall it dumped caught people in the northern part of the province, particularly in the towns of Carrascal and Cantilan, by surprise.

The Department of Public Works and Highways in Caraga said the national highway connecting the towns of Jabonga and Kitcharao had been closed to traffic as workers continued to repair three bridges damaged by floodwaters.

In the Visayas, four persons, including a 2-year-old boy, were killed as floods hit several areas in Leyte, Samar and Eastern Samar provinces.

Reports said Christian Jake Tumandao, 2, was killed after their house was hit by rocks and uprooted trees that cascaded from the nearby mountain at Barangay San Pedro in Albuera town, Leyte, on Tuesday. The boy’s mother, Jenessa, and his siblings, Rex and Kim, were unhurt.

In Eastern Samar, residents found the bodies of three men along the coast of Barangay Cabong in Borongan City on Wednesday morning.

The three, who were believed to have drowned, remained unidentified.

In Palawan, the government weather bureau and disaster response agencies alerted towns in the southern section of the province to prepare for heavy rain that may trigger landslides.