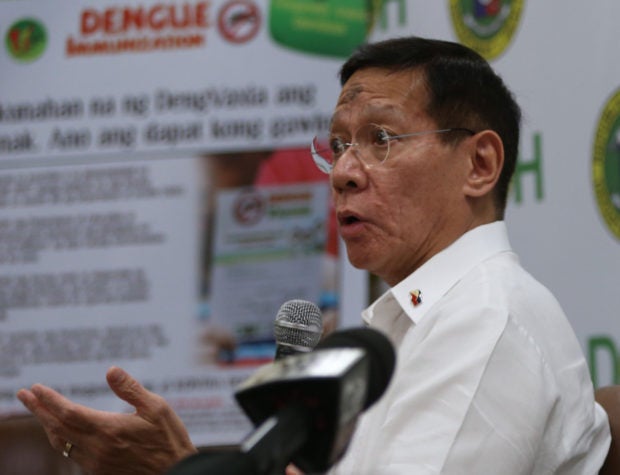 Department of Health Secretary Francisco Duque answers questions from the media during a press briefing at the DOH in Tayuman, Manila after his dialogue with parents of children who received the dengvaxia vaccine. EDWIN BACASMAS

Health Secretary Francisco Duque III on Wednesday told lawyers meddling in Dengavaxia cases to focus on the legal aspect of the issue and leave medical aspect in the hands of doctors.

[Lawyers should limit their advice to issues concerning the law – if any law was broken. They should leave matters concerning Dengvaxia, dengue, and other health issues in the hands of doctors and medical experts.]

He was reacting to a claim made by Volunteers Against Crime and Corruption (VACC) that those vaccinated by the controversial Sanofi’s product would eventually end up dead.

“There’s no basis to that claim,‘ Duque said.

Duque also corrected the claim of VACC Chairman Dante Jimenez that the DOH reneged on or has yet to fulfill its promise that it would distribute medicines to Dengvaxia and dengue victims.

He explained that hydration and immunization were key steps to help dengue victims recover.

Duque also shut down claims that the dengue cases nationwide shot up because of the vaccine.

He added that he had gone around the country, visiting public elementary where students had Dengvaxia shots, and saw that the children were healthy.

Duque said the DOH had started crafting policies to address the problem, which he stressed was first of its kind.

One of the problems the agency would need to address was communication.

He also also appealed to parents for patience and understanding since the monitoring of victims would take five to seven years. /atm