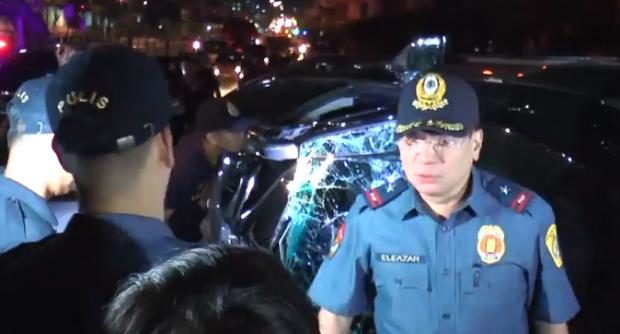 Chief Supt. Guillermo Eleazar, QCPD chief, at the crime scene in the wee hours of Tuesday, Feb. 13, 2018. (Photo from a Radyo Inquirer video)

A lawyer driving a Mitsubishi Montero rammed motorcycle-riding gunmen who tried to ambush him on EDSA near the corner of East Avenue in Quezon City shortly after midnight on Tuesday.

Chief Supt. Guillermo Eleazar, chief of the Quezon City Police District (QCPD) narrated the incident in a video report by Mark Makalalad and posted by Radyo Inquirer 990 on its Facebook page on Tuesday.

Lawyer Arjel Joseph Cabatbat was riding his SUV on the northbound lane of Edsa and was about to turn right on East Avenue when three gunmen, two on one motorcycle and one on another motorcycle, opened fire at him.

Surviving the ambush, Cabatbat speeded up and a chase followed.

The incident ended at EDSA’s northbound lane near Trinoma Mall in Quezon City, with Cabatbat managing to ram the two motorcycles with his SUV.

One gunman was killed. He was identified as PO1 Mark Boquela Ayeras, through his Philipine National Police ID.

Eleazar later confirmed that Ayeras was in fact a police officer assigned to the Regional Public Safety Battalion of the National Capital Regional Police Office (NCRPO), according to an Inquirer Radyo by Jong Manlapaz.

Two others were injured – one being taken to the East Avenue Medical Center, while the other managed to escape.

Eleazar identified the injured suspect in the hospital as John Paul Cerilo Napoles.

According to the police chief, investigators are looking into the possibility of revenge as the motive for the attack.

He said Cabatbat handled one case that involved a doctor who was sacked from his job.

Cabatbat said he had been receiving death threats. –With a report from Jong Manlapaz/Radyo Inquirer