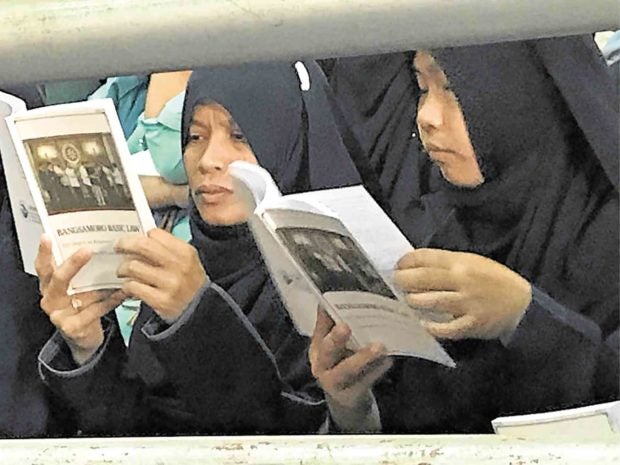 Yakan women residents of Isabela City read a draft of the proposed BBL being distributed during a consultation program in Basilan province. —JULIE ALIPALA

ISABELA CITY — Sentiments on the proposed Bangsamoro Basic Law (BBL), which seeks to carve out a new autonomous region, appeared to have taken religious lines as many Christian residents of the city expressed opposition or wariness over BBL, according to a top city official.

The city has a population of 112,700 according to 2015 data from the Philippine Statistics Authority. At least 64 percent were Christians while 32 percent were Muslims. The rest had no defined religion.

The exact number of Christians opposed to BBL was not clear but Akbar told the Inquirer he knew that the opposition was significant because the city was “dominated by Christians.”

“They are afraid of this new law and what may come out of this,” said the mayor during a consultation program here on the proposed BBL on Friday.

“In my case, I am a Moro, I am happy to see this BBL passed,” Akbar  said. “At the same time, I empathize with their stand,” said the mayor on Christian sentiments about BBL.

He said results of previous plebiscites on autonomy showed Christians in the city did not want to be part of a territory that would be governed according to Muslim traditions and laws.

Akbar did not elaborate when asked how he seemed to be sure about Christian sentiment in the city but said he was “aware of their apprehension.”

“They have been very vocal even in the past and I respect that,” he said. Akbar said even to Muslims, like him, “this law is something new.”

Ghadzali Jaafar, chair of the Bangsamoro Transition Commission (BTC), said he knew that “many residents” of the city would want to be part of the future Bangsamoro homeland. BTC had drafted the proposed BBL now pending in Congress.

According to Jaafar, Isabela City was “in the middle of Basilan and if Basilan is benefiting from the BBL, we don’t want to see Isabela being left out.”

But Section 1 of the proposed BBL’s Article No. 9 states that Sharia would apply only to Muslims.

It said: “The justice system in the Bangsamoro shall consist of Sharia which shall have supremacy and application over Muslims only.”