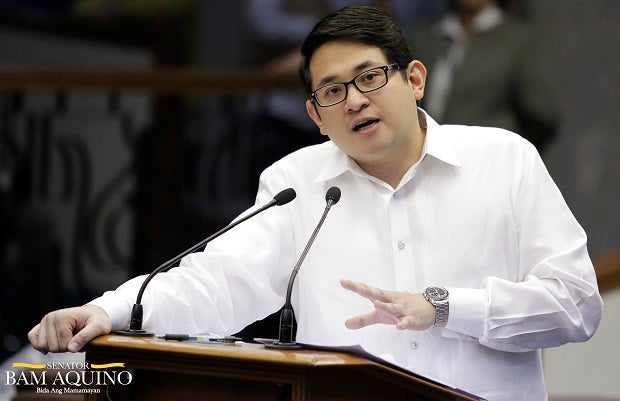 Senator Bam Aquino on Saturday expressed fear that the Tax Reform Acceleration and Inclusion (TRAIN) law will kill jobs and livelihood in the country due to rising prices of goods and services.

“We are now feeling the effects of TRAIN, not just on prices of goods, but also on jobs of thousands of Filipinos. The government is duty- bound to cushion the blows of heavy taxes on jobs and employment,” Aquino, former chairman of the Senate committee on trade, commerce and entrepreneurship, said in a statement.

Aquino issued the statement after Coca-Cola FEMSA Philippines Inc. announced it would lay off workers due to “recent developments within the beverage industry and in the business landscape as a whole.”

According to a report from Center for People’s Media, around 600 Coca-Cola workers across the country would be losing their jobs.

The senator also noted that several BPOs would relocate, abort expansion, or re-shore workers due to the effects of the TRAIN Law.

Aquino urged the government to work with the private sector “to boost job creation and strengthening job security” instead of “focusing solely on revenue-generation.”

Read Next
Israel downs Iranian drone and strikes Syria, F-16 crashes
EDITORS' PICK
Welcome the next imagery master with vivo X70 co-engineered with Zeiss
Watch live performances by ITZY, Mamamoo and other K-pop stars on Smart’s GigaPlay App
An innovative, fun shopping experience AllDay
Declaration of Pacquiao as PDP-Laban presidential bet illegal — Cusi wing
97 areas in PH under Alert Level 4 — DOH
Roque: No proof of Duterte’s link to Davao Death Squad
MOST READ
Son of prominent businessman nabbed in La Union for cocaine possession
Roque not surprised by opposition to ILC nomination: They do not wish anyone to succeed
Drilon wants income tax records of Pharmally execs with luxury cars
‘It’s time for the downtrodden to win,’ Pacquiao says on declaring bid for presidency
Don't miss out on the latest news and information.