Some solons bash president, others waltz with ‘dictator’ Du30 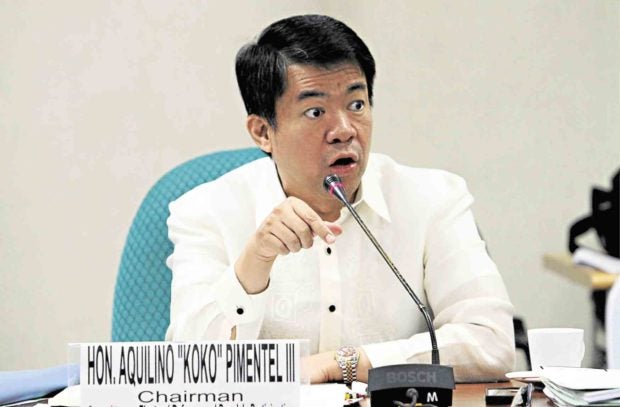 President Duterte’s admission of being a dictator drew mixed reactions from majority and opposition lawmakers on Friday, with Senate President Aquilino “Koko” Pimentel III dismissing it as “just a style (of leadership).”

“(H)e can and should do that within (the executive) branch,” said Pimentel of Mr. Duterte’s “strongman” style of leadership that the Chief Executive had justified as necessary to make the country move forward.

On Wednesday, the firebrand President suggested that the country would make no progress if he did not act like a “dictator.”

“If you say dictator, I am really a dictator. Because if I don’t [act like a] dictator, son of a bitch, nothing will happen to this nation. That’s true,” Mr. Duterte said in Cebuano during a speech before former communist rebels in Malacañang.

“If I don’t [act like] a dictator—my style now—nothing will happen to this country,” he added.

But Sen. Antonio Trillanes IV, one of Mr. Duterte’s fiercest critics, said nothing good had happened to the country two years into the Duterte administration despite the latter’s claim.

“He just messed up the country, killed the poor, made life difficult for Filipinos and destroyed democratic institutions,” the senator said.

Dictatorship is a touchy issue in the Philippines which suffered years of brutality and kleptocracy under the late President Ferdinand Marcos, who declared martial law in 1972 and was ousted in a popular uprising in 1986.

Mr. Duterte has often spoken of his admiration for the late strongman.

Dictatorship, said Sen. Paolo Benigno (Bam) Aquino in a statement, has brought about killings and abuses, unemployment, corruption, and debt problems to the country.

“We don’t need a dictator. What we need is a leader who has genuine concern for the country, especially for the poor,” Aquino added.

“(The President was) of course exaggerating since we all know there is no dictatorship prevailing in the country,” Sen. Panfilo Lacson said, adding that Mr. Duterte  “might be referring to his style of leadership toward his subalterns in the executive (branch).”

The former Philippine National Police chief said that if he were “a leader of men” as he was when he was still with the police service, “it pays to adopt that leadership style, to the point of being a dictator when dealing with shenanigans in the government bureaucracy.”

But Lacson also warned that Mr. Duterte’s words would not help his current issue with the International Criminal Court, which has launched a preliminary examination into the drug-related killings in the country.

An opposition lawmaker said the President’s admission of being a dictator “confirms all along what he (was) doing since Day One of his administration.”

Said Akbayan Rep. Tom Villarin:  “From extrajudicial killings in his drug war, (to the) martial law declaration, contempt for the rule of law, harassing constitutional officers, quashing legitimate dissent, rude and violent language, being a misogynist, among others  (all) are hallmarks of a dictator.”

Villarin added: “Dictators bring down a country, and bring pain and untold sufferings to people and to children who will have a traumatized future. And this is no joke nor a trivial matter that can be spinned by Malacañang.”

But being a dictator is not so bad if it’s President Duterte, said Ako Bicol Rep. Rodel Batocabe.

“If (being) a dictator means having the political will and guts to do what he thinks is right for the benefit of the silent majority despite strong opposition from a noisy minority, then he is a dictator,” Batocabe said.

“If (being) a dictator means going against traditions and fighting well-entrenched establishments and exposing them for what they are, he is a dictator. And finally, he is a dictator for saying and doing things we are too afraid to say and do in public,” he added.

Mr. Duterte, according to the party-list lawmaker, is a dictator “for having such courage to go against well-established political norms and institutions like the United States and the European Union as well as the Church, which past democratic presidents could not even try, not even in their dreams.”

“The people of the Republic of the Philippines democratically elected a strong President. So what’s the issue? The guy is just being true to form. He never lied about how he would run the country,” Nograles said.

Read Next
Life crumbles for family of OFW killed in big Taiwan quake
EDITORS' PICK
Nestlé Philippines’ ‘NESCAFÉ Plan’ bags Grand Anvil at PRSP 56th Anvil Awards
Pope Francis to meet top cleric Sistani on second day in Iraq
Smart reinforces superiority with best speed and mobile video experience in PH
Don’t waste the hope of vaccines, warns WHO
Every Filipino home can now be a smart home with realme TechLife
822 NPA-free barangays set to get P20-M gov’t aid — Esperon
MOST READ
So: I lacked connections to succeed in PH ‘culture’
Gerald admits being with Julia, reveals breakup with Bea through ‘too many conversations’
Robredo on Sara Duterte leading poll surveys: Why are Filipinos drawn to leadership of this kind?
Giant clams worth P160M seized in Palawan raid
Don't miss out on the latest news and information.