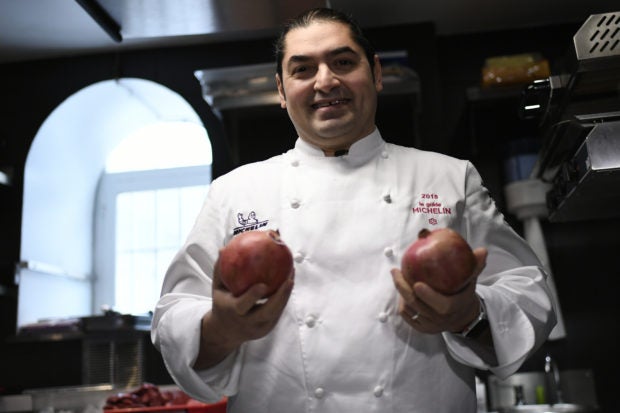 Lebanese chef Alan Geaam poses in his restaurant ‘Alan Geaam’ on February 7, 2018 after he received a single star from the Michelin guide for his restaurant in Paris. / AFP PHOTO / STEPHANE DE SAKUTIN

When Lebanese chef Alan Geaam first arrived in Paris two decades ago he found himself sleeping on the streets, lost and penniless with hardly a word of French.

This week Geaam, who began his career as a dishwasher while he was sleeping rough in a Paris park, received his first Michelin star from the French gastronomic bible for his acclaimed new restaurant within a stone’s throw of the Arc de Triomphe.

“I never thought the Michelin would be interested in someone like me, who was self-taught, who had to sleep in the street at 19 and who began as a dishwasher,” he told AFP.

“I thought the guide was about chefs in big fancy hotels or those trained by the great masters. But it turned out to be the opposite. It’s a wonderful surprise,” said the 43-year-old, who was born to Lebanese parents in Liberia, before they exchanged one war zone for another by returning to Beirut.

By then Geaam’s fascination with food was clear, watching cookery shows on television rather than cartoons after school.

He started cooking while doing his national service in Lebanon, and the colonel of his regiment was so impressed he made him his personal chef.

But Geaam never thought we would be able to cut the mustard in France, and only got his break when the chef of the restaurant where he was washing the dishes was rushed to hospital when he slashed his hand with a knife.

“I worked during the day as a construction worker and at night delivering pizzas and washing dishes. One night the cook cut his hand and had to go to hospital. No one asked me, but I just took over. There were 14 tables and so I just feed the customers and at the end of the night they were delighted.”

“The reason I cook is to make people happy,” said Geaam. And he has certainly spread joy among restaurant critics with Michelin’s rival Gault Millau guide raving about his langoustines and chard and its dark chocolate-colored sauce tinged with Vietnamese cardamom.

Alexander Lobrano, author of “Hungry for Paris”, was even more effusive, declaring this “gentle, shrewd, self-taught chef as one of quiet men of Paris gastronomy… who has a brilliant future ahead of him.”

Although Geaam delights in bringing the very best of French produce to his table, Lobrano said he also brings the “tender buds of his very personal cooking that makes references to the lost world of a little boy born to a foreign family living in tropical Africa.”

And the influence of his Lebanese roots is never far away either.

One of Geaam’s favourite dishes at the moment is “an escalope of foie gras lacquered with pomegranate molasses served with a tartlette of beetroot and pomegranate.

“I ate a lot of pomegranates when I was a kid,” he said. “I made juice with them, I made lots of reductions with them, and I loved putting this very Lebanese touch with something so French as foie gras.”

Since Geaam got his Michelin star on Monday night his restaurant’s phone has not stopped ringing.

His said his small, tight team of highly-talented chefs — whose CVs he admits look far more impressive than his own — “really feel that something has happened in our lives.”

“You can criticize the Michelin guide but I can tell you the effect, a star massively boosts a restaurant.”

Within hours the restaurant was booked up for three weeks. “It is quite something,” he said.

Geaam, who told how his son boasted to his friends at school that his father got a Michelin star, put his success down to his own parents, who “lost everything” in Liberia only to have to struggle again in Lebanon during the civil war.

He said working with his father in his grocery shop from the age of 10 gave him a taste for business while his mother “taught me how to love people and how to cook.”  /muf